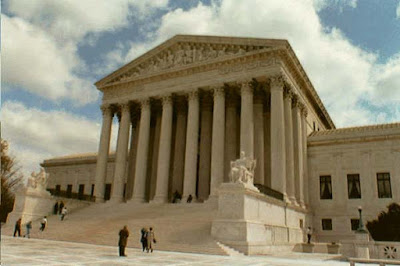 I don't often wax political here, but why do I feel that some of our nation's most dangerous terrorists have seats on the Supreme Court? Since the days of that irrepressible swinger, Sandra Day O'Connor, we seem to lurch from a 5-4 decision one day, to a 4-5 decision the next. And now another mystical reed-bender, Anthony Kennedy, keeps her chair warm. I can't remember where I read it, but a columnist recently made the suggestion that we save a bunch of money and dismiss the other eight Justices, and just go with Kennedy, since he usually casts the deciding vote anyway.

Rich Lowry's recent article, "The High Court's Supreme Clown," gives an idea of just how serious the present situation is:

Why did the Founders bother toiling in the summer heat of Philadelphia in 1787 writing a Constitution when they could have relied on the consciences of Supreme Court justices like Anthony Kennedy instead?

Kennedy is the Supreme Court's most important swing vote and its worst justice. Whatever else you think of them, a Justice Scalia or Ginsburg has a consistent judicial philosophy, while Kennedy expects the nation to bend to his moral whimsy. With apologies to Louis XIV, Kennedy might as well declare "la constitution, c'est moi!"

In a 2005 interview, Kennedy said of the Court, "You know, in any given year, we may make more important decisions than the legislative branch does -- precluding foreign affairs, perhaps." (He was wise to include the "perhaps," in light of the recent Guantanamo Bay decision.) He went on to note how judges need "an understanding that you have an opportunity to shape the destiny of the country." (read more...)

Thanks to this little man in a big chair, we're getting a taste of what it would be like to live in a dictatorship. Given the oversized position the Supreme Court has developed, the importance of the next national election cannot be overstated. One of two men will have the responsibility of nominating replacements for two or three Justices. Don't sit back and let someone else choose the next president. I'm not excited about our choices, but at least we do have a clear choice, especially when it comes to the kind of Justice we might see sitting on a future Supreme Court.
Posted by Fr. Christopher George Phillips at 9:27 AM