"When I survey the wondrous cross..." 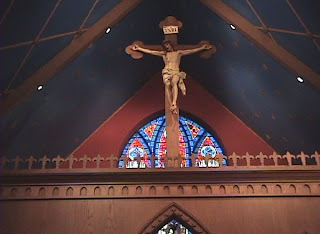 One of the striking features when entering our church is the almost life-sized crucifix surmounting the rood screen. It marks the boundary between the nave and the sanctuary. How it came to be here belongs to the lore of our parish.

When the church was built in 1987 there was but a simple wrought iron rail where people knelt to receive Holy Communion. When it was installed it was thought of as temporary, because the plan all along was to construct a rood screen with a communion rail incorporated into it. I found the right carpenter to build it, and plans were started. The search began for the great crucifix which would crown the screen. Catalogues were scoured, but I found nothing suitable. Word came that there was a large crucifix stored in the basement of a local convent. I went to look at it, but it wasn’t the right size. One day the idea came to me to call the Franciscan Sisters of the Atonement in Graymoor. I spoke to Sr. Alexis Joseph, S.A., who was a good friend of the parish, and the godmother of one of my daughters.

“Sister, you don’t know of any large crucifixes looking for a home, do you?” I asked. “No, I don’t,” Sister replied, “but if I hear of anything I’ll let you know.” I hung up the phone, not feeling very hopeful. Scarcely had the receiver been replaced, and the phone rang. It was Sister Alexis Joseph. “You’re not going to believe this,” she said, and then went on to tell me, “I had just hung up the phone from our conversation, and when I happened to look out the window there was a truck with a trailer behind it coming into the convent driveway. I could see there was something wrapped up on the trailer, and when I went out to greet the two men in the truck, they told me that they had salvaged something from their church in upstate New York, which was undergoing ‘renovations.’ When I asked them what it was they told me that it was a really big crucifix.”

Apparently these faithful Catholic men couldn’t bear the thought of it being thrown out, so they decided to load it onto a trailer and drive to Graymoor because, in their words, “the Sisters will know what to do with it.” Sister Alexis Joseph went on to tell me, “I shouldn’t have been surprised that it arrived just as you were looking for it!”

So the Sisters shipped it to Texas, where it had a short wait for the screen to be built. When it was installed in the church it was as though it was put in the home for which it was always intended. Sister Alexis Joseph died a few years ago, but I think of her frequently as I pass under the great crucifix into the sanctuary, and I pray for the repose of her soul. She was such a delightful woman and a faithful religious, and she told me that her role in finding our crucifix was one of her truly unexpected joys. And I offer an occasional prayer of thanksgiving for those men, too, who like Simon of Cyrene, helped to carry the cross to where it belonged.
Posted by Fr. Christopher George Phillips at 5:41 PM