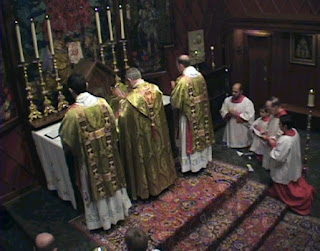 When I wrote my previous post about our parish’s experience some years ago with the 1962 Missal, I thought maybe what had happened could be instructive and helpful for parishes where the motu proprio might be implemented. I wasn’t looking for sympathy, although lots of people expressed their regret about what had happened. I appreciate the many comments, both on the various blogs and also what I received privately by e-mail, but my only purpose was to try and help others avoid possible difficulties.

Unfortunately, things seem to be ratcheting up a bit. A recent comment (anonymous, of course) takes me to task for my “disobedience” and for causing “scandal.” Here’s the comment:

Hi Father, I was just looking over the Motu Proprio which states "In parishes where a group of faithful attached to the previous liturgical tradition exists stably, let the pastor WILLINGLY ACCEDE to their requests for the celebration of the Holy Mass according to the rite of the Roman Missal published in 1962." Thus, you should grant it without the need for the Archbishop to request it. I am sad to hear about your previous experience, but I am more alarmed to hear that so soon after the Motu Proprio was published, you already decided to, for lack of a better word, disobey. Is the Tridentine Mass not Holy too? Are the Tridentine Mass sheep not yours to watch over too? If all the other pastors follow your reasons, then the Motu Proprio will come to naught and the "smoke of Satan" will continue to choke the Roman Catholic Church. With all sincerity, I mean no disrespect Father. I beg you to reconsider the stance you have publicly declared because I am scandalized.

Let me help “anonymous” understand the situation better. Our Lady of the Atonement is a Personal Parish which was established for a particular liturgy, namely, the Anglican Use liturgy. It is part of the Latin Rite, but it was canonically erected for the specific purpose of providing the liturgical use found in the Book of Divine Worship. The fact that we also celebrate the Mass of Paul VI is simply part of our wider apostolate within the archdiocese, but it’s not why the parish was established. When Archbishop Flores asked if I would consider offering a Mass according to the 1962 Missal, he made the request knowing it wasn’t within the stated the purpose of the parish but he knew we were always willing to assist the wider mission of the archdiocese in any way we could. That was why I complied with his request.

Those who belong to our parish are here either because they are converts or because they have found the spiritual life here to be most conducive to their own. This is a “personal parish” with no territory of its own, so no one is here because they happen to live within the boundaries. They are here because they have chosen to be here. Because of the origins and particular canonical foundation of the parish, there is no “group of faithful attached to the previous liturgical tradition.” This is why I stated that we would not return to the use of the 1962 Missal unless it was requested of me by the archbishop.

I guess this comment by “anonymous” is yet another indication to me of an area of potential difficulties in parishes. I certainly want to see pastors respond to the motu proprio in accordance with the mind of the Holy Father, and that may take a little time in some places. But I don’t think it’s going to help if accusations are hurled at priests. I don’t like being called disobedient when I’m not, and I don’t like to be blamed for scandalizing someone when I haven’t.

For those who want to help the motu proprio bear fruit – think before you speak, and be sure of all the facts before you accuse.
Posted by Fr. Christopher George Phillips at 1:47 PM