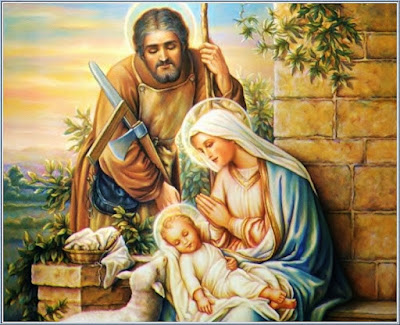 How many times do we see advertisements which make Dad look like an incompetent buffoon who needs to be corrected either by his wife or by his children? Or how many times have we heard a mother refer to “her kids” and she’s including her husband in that group?

We know it shouldn’t be like that, but much of our society has fallen into a form of disrespect for husbands and fathers. I’m sure it’s not intentional in most cases, but we see it sometimes even in Catholic families, where there should be a much better understanding of God’s plan for men and women in Holy Matrimony, and for the children which are the fruit of that sacrament.

Some of it may be self-inflicted on the part of some men, who have not taken up their proper role as husband and father, even neglecting their all-important task of being the spiritual leader of their family. Some of it may have seeped in from a society which often denigrates the traditional understanding of marriage.

One thing is for certain. It’s up to us as faithful Catholics to uphold marriage as God intends it, and that means having husbands who treasure their wives, and wives who respect their husbands. It means raising our children with the understanding that their parents are the ones responsible for guiding the family in its values and its choices, and those parental choices are to be obeyed. It means having fathers who lead the spiritual lives of their families, loving their families as Christ loves the Church with a love so deep that He actually laid down His life in sacrifice.

If your father is departed, pray especially for the repose of his soul, giving thanks for what was good and forgiving anything that might have been less than good. If your father is living, let him know you love him by telling him, by respecting him each day, and by understanding how difficult fatherhood can sometimes be. Fathers, ask St. Joseph to pray for you. He is your patron saint. Wives and children, be to your husband and father as Mary and Jesus were to Joseph. In that way, may our families become more and more like the Holy Family in Nazareth.

Posted by Fr. Christopher George Phillips at 9:38 AM