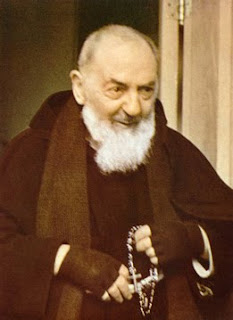 St. Pius was born in 1887 in Petrelcina, a town in southern Italy. His family were farmers, and his father worked also as a shepherd to support the family. In fact, when St. Pius was a boy his father was gone for periods of time because he had come to America looking for work, sending money back to his family. When St. Pius was 15 he entered the novitiate of the Capuchin Friars and made his first vows when he was 19. He suffered several health problems, but he was eventually ordained at age 22 on 10 August 1910, and was known after that as Padre Pio.

He had been a priest for about eight years. One morning he was praying before a crucifix, when he received the stigmata. He is the first priest ever to receive this outward mark of union with Christ Crucified – St. Francis of Assisi was a deacon. In fact, because this became a source of curiosity for so many people, Padre Pio was forbidden from having any public ministry for some years, even having to say Mass privately. This was a tremendous burden for him, but he accepted it in complete obedience to his superiors. But as word spread, especially after American soldiers brought home stories of Padre Pio following WWII, the priest himself became a point of pilgrimage for both the pious and the curious. He would hear confessions by the hour, reportedly able to read the consciences of those who held back. He was able to bi-locate, levitate, and heal by touch, although he himself never understood or emphasized these gifts.

People always seem to be most fascinated with these dramatic gifts, but the foundation of St. Pius' life was his total love for Jesus, especially in the Blessed Sacrament, and his life of prayer for others, especially prayer for healing – both spiritual and physical healing. In fact, in 1956 he founded the House for the Relief of Suffering, a hospital that today serves about 60,000 patients a year.

St. Pius died in 1968, and people continued to report many miracles and healings that had come through his intercession. Pope John Paul II beatified him in 1999, and then in 2002 he was canonized in the presence of more than 300,000 people who gathered in Rome for the Mass.

Almighty everliving God, who, by a singular grace, didst give the Priest Saint Pius a share in the Cross of thy Son and, by means of his ministry, renewed the wonders of thy mercy: grant that, through his intercession, we may be united constantly to the sufferings of Christ, and so brought happily to the glory of the Resurrection; through Jesus Christ thy Son our Lord, who liveth and reigneth with thee, in the unity of the Holy Spirit, ever one God, world without end. Amen.