The grave has no victory... 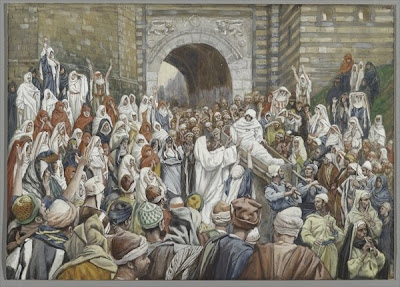 Jesus went to a city called Nain, and his disciples and a great crowd went with him. As he drew near to the gate of the city, behold, a man who had died was being carried out, the only son of his mother, and she was a widow; and a large crowd from the city was with her. And when the Lord saw her, he had compassion on her and said to her, "Do not weep." And he came and touched the bier, and the bearers stood still. And he said, "Young man, I say to you, arise." And the dead man sat up, and began to speak. And he gave him to his mother. Fear seized them all; and they glorified God, saying, "A great prophet has arisen among us!" and "God has visited his people!" And this report concerning him spread through the whole of Judea and all the surrounding country.


Why did Jesus raise this young man from death? Was it just so that this widowed mother could have her son back? Certainly, that was the immediate result of Christ’s action -- but that wasn’t the primary purpose of it all. Rather, Jesus was using a very human and tragic situation to show the world that He is Lord of all -- that death is no match for his power, that death has no sting, that the grave has no victory, in the face of Christ’s divine power.

This is what we believe. We bring to God in prayer all those who have died, and we commend them to His merciful keeping, knowing that for those who are being cleansed in purgatory, they live with the sure hope of eternal life. And while the purgation may be difficult, nonetheless they live in the splendid hope that they are being prepared for the Beatific Vision, when they will see God face to face. We do not need folk tales and fables to soften the difficulty of handing our loved-ones over to God in death. Rather, we come to God in the clear knowledge that because of the power of Christ’s resurrection, all the faithful departed have that same promise, that Christ has prepared a place for them -- and with the help of our prayers, so our departed loved ones are being prepared to claim that place as their own.
Posted by Fr. Christopher George Phillips at 6:39 AM