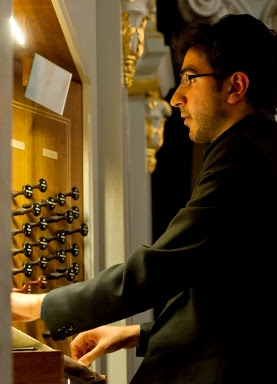 WE ARE PLEASED TO ANNOUNCE that Haig Aram Vosgueritchian, born in the Holy City of Jerusalem, will be arriving with his wife Gloria and their infant daughter Caterina on June 24th, when Haig will become a member of the Academy’s music faculty and also the assistant organist/choir director for the church.

Haig earned his first degree in Piano performance from the A. Pedrollo Conservatory, Vicenza, Italy, and soon after he returned to Jerusalem and became a Piano and Music Theory teacher at the Magnificat Music Institute in Jerusalem.

In 1998 he began serving as an organist at the St. Lazarus Church in Bethany, and in the year 2001 he started his service at St. Savior’s Church, which is the Mother Parish of Jerusalem. In 2004 Haig began assisting the Principal Organist at the Basilica of the Holy Sepulcher and continued in that position until 2007, when he returned to the A. Pedrollo Conservatory in Italy to continue his Master’s degree in Organ Performance and another Master’s degree in Organ for the Liturgy. Haig returned to Jerusalem in 2010 and commenced his work as Organist and Choir Conductor at the Basilica of the Annunciation in Nazareth. In that same year he also taught Gregorian chant at the Stadium Theologicum Jerosolymitanum.

In the year 2013 he began teaching music theory at the Armenian Orthodox seminary in Jerusalem and served as the seminary choir accompanist.

In 2015 he became the Organist for the Custody of the Holy Land, accompanying the various Solemn Masses, including the Midnight Mass in Bethlehem, Holy Week in the Holy Sepulcher in Jerusalem, and accompanying the Custody of the Holy Land Choir. Haig Aram Vosgueritchian is an internationally known concert organist, presenting concerts not only in Israel, but also in Italy, Lithuania, and the United States. He is the founder of the Basilica Children’s choir (Zanabek al Basilic), is the founder and artistic director of the Holy Land Organ Festival. He is active in writing music and musical arrangements for choirs and in composing children songs.

We are excited and happy to have Haig, Gloria, and Caterina as part of our Atonement family.  And I'm sure our organist and music director Brett Patterson, who has been doing the work of two, is happiest of all!

Posted by Fr. Christopher George Phillips at 8:24 AM