Have things changed so little? 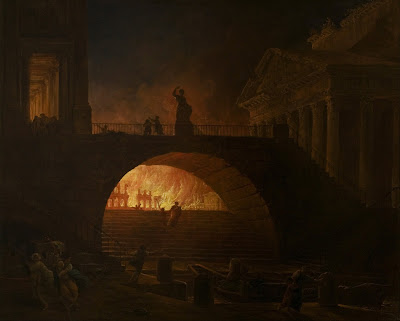 In commemorating the First Martyrs of Rome I recounted the story that in the summer of 64, Rome suffered a terrible fire that burned for six days and seven nights consuming almost three quarters of the city. The Emperor Nero was a perverted creep, and the fact that he began the construction of his Golden House where much of the destruction had taken place led people to believe that he himself had arranged for the fire. To deflect these accusations and to pacify the people, Nero laid blame for the fire on the Christians and carried out the vicious and inhuman killing spree, sending untold numbers of the Faithful to horrific tortures and death.

Fast forward a few thousand years. A gunman opens fire in a nightclub which is a gathering place for homosexual persons. It’s not just any gunman. It’s a man who goes out of his way to pledge his allegiance to a militant Islamic terrorist organization, but we’re supposed to pay no attention to what he said and why he did it. Instead, in our politically correct age, with some political leaders who seem hell-bent on sparing radical Islam from receiving any bad press, and media which are willing to prostitute themselves, who are we to think is to blame for the carnage? Why, the Christians of course! The Christians with their up-tight attitudes trying to force their narrow standards on the rest of society, they’re the ones who let loose the shower of bullets.