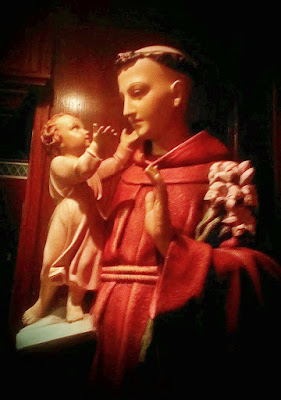 The Feast of St. Anthony of Padua is on June 13th, and it's a pretty big deal for us here in the city that bears his name. It was on St. Anthony's Day in 1691 that the Franciscan fathers arrived at a small Indian village near the river, and named the settlement after him. From that tiny beginning, San Antonio is now the seventh largest city in the United States, and as far as I'm concerned, a wonderful place to live.

St. Anthony was born in Portugal and entered the Augustinian monastery of Sao Vicente in Lisbon when he was fifteen. When news of the Franciscan martyrs in Morocco reached him, he joined the Franciscans at Coimbra. At his own request, he was sent as a missionary to Morocco, but he became ill, and on his return journey his boat was driven off course and he landed in Sicily. He took part in St. Francis' famous Chapter of Mats in 1221 and was assigned to the Franciscan province of Romagna.

He became a preacher by accident. When a scheduled preacher did not show up for an ordination ceremony at Forli, the Franciscan superior told Anthony to go into the pulpit. His eloquence stirred everyone, and he was assigned to preach throughout northern Italy. Because of his success in converting heretics, he was called the "Hammer of Heretics" and because of his learning, St. Francis himself appointed him a teacher of theology.

St. Anthony of Padua was such a forceful preacher that shops closed when he came to town, and people stayed all night in church to be present for his sermons. He became associated with Padua because he made this city his residence and the center of his great preaching mission.

After a series of Lenten sermons in 1231, Anthony's strength gave out and he went into seclusion at Camposanpiero but soon had to be carried back to Padua. He did not reach the city but was taken to the Poor Clare convent at Arcella, where he died. He was thirty-six years old, and the whole city of Padua turned out in mourning for his passing.

Grant, O Lord, that the solemn festival of thy holy Confessor Saint Anthony may bring gladness to thy Church: that being defended by thy succour in all things spiritual, we may be found worthy to attain to everlasting felicity; through Jesus Christ thy Son our Lord, who liveth and reigneth with thee, in the unity of the Holy Spirit, ever one God, world without end. Amen.

Several years ago I wrote two hymn texts in honour of the Patron of our City and our Archdiocese, and they are published here for anyone who would like to use them.

1.  Praise to God the mighty Father, who didst call Saint Anthony
from a life of sore temptation to the way of purity.
Humble work and meek obedience marked his holy way of love;
now, his earthly task completed, works his wonders from above.

2. Praise to Jesus Christ our Saviour, who didst give Saint Anthony
grace to preach with zeal and boldness, giving truth new charity.
Men, once lost, who heard the Gospel from the lips of Francis' son
came to know God's grace and favour, and the life which Christ had won.

3.  Praise to God the Holy Spirit, who inspired Saint Anthony
in the way of love and service, calling men to charity,
lifting up the fallen sinner, feeding them with Living Bread,
showing men the way to heaven, there to live with Christ their Head.

4.  Gracious Doctor and Confessor, holy Priest with golden tongue,
joined with all the saints of heaven, praising God the Three in One;
help us in our earthly journey, keep our thoughts on God most high,
that with thee, Christ's saint and servant, we may live and never die.

1.  Simple saint and faithful priest,
at this Eucharistic feast
we recall thy holy face,
and with thee our Lord embrace.
Give us true simplicity:
pray for us, Saint Anthony.

3.  Error flees before God's Light:
through thy life Christ shineth bright,
showing men the way to peace,
evil's hold from them release.
Free from evil may we be:
pray for us Saint Anthony.