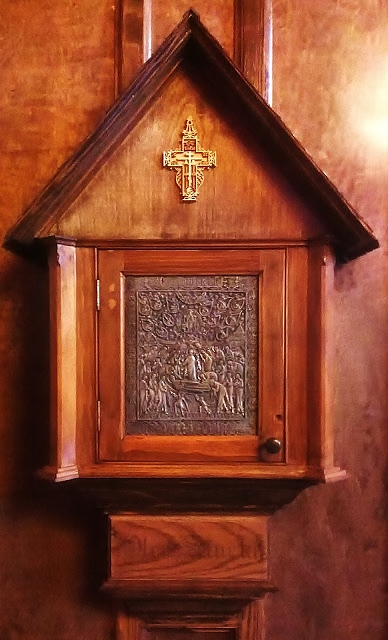 Located on the west wall in our baptistry, the ambry is where the holy oils are kept. Also known as the "aumbry" or "almery," there are examples found throughout England and continental Europe. Many of them date from about the 13th century, and they were often used for the storage of chalices and other sacred vessels, as well as the holy oils and even the Blessed Sacrament.

After the protestant reformation, the Tridentine reforms forbade the reservation of the Blessed Sacrament in the ambry, requiring a tabernacle or hanging pyx to be used for that purpose. It was at that time the ambry became a place exclusively for keeping the holy oils.

The ambry in our baptistry is constructed of oak, with the words "Olea Sancta" carved on it, and the panel in the door is a silver icon depicting the "Dormition of the Blessed Virgin Mary."
Posted by Fr. Christopher George Phillips at 6:32 AM