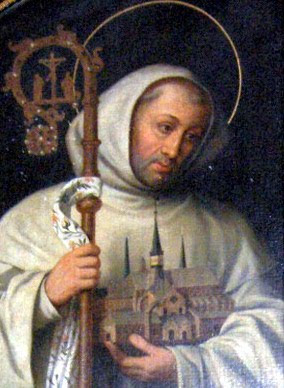 It was said of St. Bernard that his personality “was so attractive, his power of persuasion so difficult to withstand, that we are told that mothers hid their children and wives clung to their spouses lest he attract them into the monastery.” Who was this man? Bernard’s father was a knight who had died in battle and his mother also died when Bernard was still quite young. In the year 1098 Bernard felt called to join a monastic community of reformed Benedictines. In his excitement about entering the monastery, he also persuaded 24 of his friends, four of his brothers and two of his uncles to join with him. This shows the influence that he had at a young age! The community had been dwindling, so we can imagine what it meant when this zealous young man showed up with thirty other men, ready to learn and live the monastic life. Bernard really wanted to live a hidden life, spending his time doing simply manual work and praying to God. Instead, St. Bernard and 11 others were sent out to establish a monastery. Before the monastery was established the town was called Wormwood and was a haven for thieves; after the monastery was established the area was known as Clairvaux, the Valley of Light. It was here in Clairvaux where Bernard was positioned as abbot and became well-known throughout Christendom.

This newly established monastery grew fast and soon had 130 monks. At first St. Bernard was very strict about fasting and would allow the monks to eat very little, but an experience with serious sickness helped him to understand that God had created the body with a need for food, so he reformed the requirements, although life was still quite strict. He felt led to start preaching and became so famous for his preaching that he was sought from all over and people started flocking to hear Bernard of Clairvaux. The teachings brought a lot of people, but St. Bernard also prayed for the sick who came, and many of them were healed by God – sometimes when St. Bernard simply made the sign of the cross over them.

All St. Bernard wanted was a life of contemplation in Clairvaux, but his reputation was wide spread and his advice sought after by princes, popes, and other high ranking leaders in the religious and political arenas. St. Bernard used his influence to work for real justice and he did his very best to make sure that holy and righteous men were placed in positions of leadership. In fact, St. Bernard influenced many bishops and other leaders to change their ways and humble themselves.

As St. Bernard grew older, he began to tire from all his travelling and preaching, and settling disputes, but finally he was able to return to Clairvaux where he continued in his meditations and writings. He spent his last few years writing, and his works are still among the classic works on the Catholic faith. On August 20, 1153 he gathered those who were close to him and received the Last Sacraments. He died at the age of 63.

O God, by whose grace thy servant St. Bernard of Clairvaux, enkindled with the fire of thy love, became a burning and a shining light in thy Church: Grant that we also may be aflame with the spirit of love and discipline, and may ever walk before thee as children of light; through Jesus Christ our Lord, who with thee, in the unity of the Holy Spirit, liveth and reigneth, one God, now and for ever. Amen.

From Our History: First Construction

The original Church of Our Lady of the Atonement was built in 1986-87 for the grand sum of $500,000 (which seemed to be an absolute fortune at the time), and these pictures show the process of its construction.

Posted by Fr. Christopher George Phillips at 10:51 AM 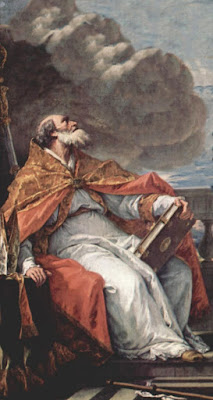 Eusebius was the founder of the canons regular, priests living under a religious rule and dedicated to pastoral work. The canons regular was the immediate result of the rise of monasticism in the East, and St. Eusebius of Vercelli saw the possibilities of this new movement for the clergy. His example was imitated all over the West and brought about a renewal of clerical life. He was born in Sardinia and as a child was taken to Rome, where he became a member of the Roman clergy under Pope Julius. Consecrated for the see of Vercelli in 344, he gathered his clergy into a community life, founding also the dioceses of Turin and Embrun. In 355, he attended the Council of Milan as legate of Pope Liberius, which defended St. Athanasius against those Western bishops intimidated by the emperor. When Eusebius was ordered along with other bishops to condemn Athanasius, he refused, insisting instead that they all sign the Nicene Creed. When threatened by the emperor, Eusebius stood his ground and told the emperor he had no right interfering in Church matters.

In anger, the emperor sent Eusebius into exile in Palestine, where he was severely mistreated by the Arians. He was moved around from place to place and after his release by the Emperor Julian he consulted with Athanasius in Alexandria on the Arian crisis. Returning to Italy, he joined with St. Hilary of Poitiers in opposing the Arian bishop of Milan and returned to Vercelli amid the rejoicing of his people.

Eusebius is considered by many to be the author of the Athanasian Creed, and a copy of the Gospels written in his own hand is preserved in the cathedral at Vercelli. He died on August 1, 371, his courage in suffering for the faith inspiring other bishops to oppose the Arian heresy.


(Excerpted from the The One Year Book of Saints)


Lead us, O Lord God, to imitate the constancy of Saint Eusebius in affirming the divinity of thy Son: that, by preserving the faith he taught as thy Bishop, we may merit a share in the very life of the same Jesus Christ thy Son our Lord; who liveth and reigneth with thee, in the unity of the Holy Spirit, ever one God, world without end. Amen. 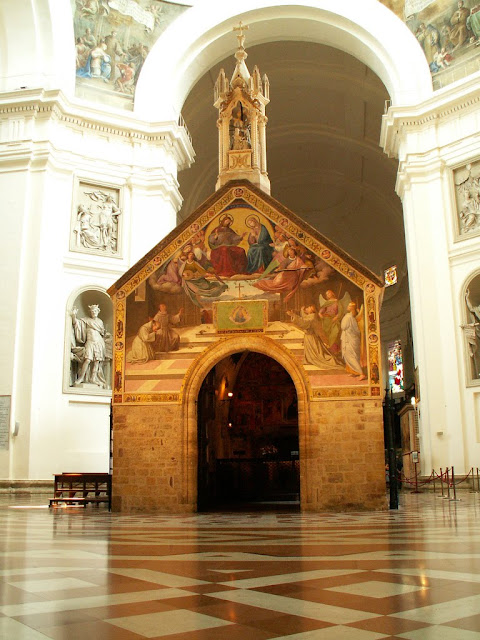 On a night in July 1216, St. Francis was at prayer in the little church of Portiuncula, devoured by love for God and a thirst to save souls. He prayed for the forgiveness of sins of mankind. Suddenly a brilliant light shone all around. In great splendor Jesus and Mary appeared in the midst of a dazzling cloud surrounded by a multitude of radiant angels. ...Then Jesus said to him: "Francis you are very zealous for the good souls. Ask me what you want for their salvation." St. Francis was rapt in ecstasy before Our Lord. When he regained his courage, he said, "Lord, I, a miserable sinner, beg you to concede an indulgence to all those who enter this church, who are truly contrite and have confessed their sins. And I beg Blessed Mary, your mother, intercessor of man, that she intercede on behalf of this grace."

The Merciful Virgin at once began to beseech her Son on behalf of Francis. Jesus answered: "It is a very great thing you ask me; but you are worthy of even greater things, Friar Francis, and greater things you will have. So I accept your request, but I want you to go to my Vicar, to whom I have given the power to bind and loose in heaven and on earth, to ask him on my behalf for this indulgence."

The Pope granted this petition, and this indulgence has been extended to all parish churches throughout the world for one day each year. The date has been set from noon on August 1 until midnight August 2, the feast of Our Lady of the Angels. It is said that St. Francis was given this day by Our Lord because of the feast of the Chains of St. Peter, celebrated on August 1, commemorating Peter's being released from prison, his chains removed. This is an extraordinary demonstration of God's mercy in removing the chains of sin from those who devoutly and faithfully seek to gain the indulgence by completing its requirements.

The conditions to obtain the Plenary Indulgence of the Forgiveness of Assisi (for oneself or for a departed soul) are as follows:

- Sacramental Confession (during eight days before or after).
- Participation in the Mass
- Recitation of the Apostle's Creed, Our Father, and a prayer for the pope's intentions.
Posted by Fr. Christopher George Phillips at 9:49 AM