Witnesses to the Truth... 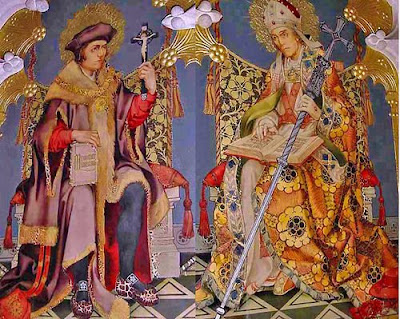 Two great heroes of the English Church, forever linked together, are St. John Fisher (1469-1535) and St. Thomas More(1478-1535). Standing for the apostolic dignity of the Church as against secular attempts to undermine its rightful authority, these two shed their blood for their consciences' sake, out of love for Jesus Christ.

We are fortunate to have a lengthy description of St. Thomas More, written by his good friend Erasmus, in letter dated 1519:
"You ask me to paint you a full-length portrait of More as in a picture. Would that I could do it as perfectly as you eagerly desire it. At least I will try to give a sketch of the man, as well as from my long familiarity with him I have either observed or can now recall. To begin, then, with what is least known to you, in stature he is not tall, though not remarkably short. His limbs are formed with such perfect symmetry as to leave nothing to be desired. His complexion is white, his face fair rather than pale, and though by no means ruddy, a faint flush of pink appears beneath the whiteness of his skin. His hair is dark brown, or brownish black. The eyes are grayish The eyes are grayish blue, with some spots, a kind which betokens singular talent, and among the English is considered attractive, whereas Germans generally prefer black. It is said that none are so free from vice.

"His countenance is in harmony with his character, being always expressive of an amiable joyousness, and even an incipient laughter, and, to speak candidly, it is better framed for gladness than for gravity and dignity, though without any approach to folly or buffoonery. The right shoulder is a little higher than the left, especially when he walks. This is not a defect of birth, but the result of habit, such as we often contract. In the rest of his person there is nothing to offend. His hands are the least refined part of his body.

"He was from his boyhood always most careless about whatever concerned his body. His youthful beauty may be guessed from what still remains, though I knew him when be was not more than three-and-twenty. Even now he is not much over forty. He has good health, though not robust; able to endure all honourable toil, and subject to very few diseases. He seems to promise a long life, as his father still survives in a wonderfully green old age.

"I never saw anyone so indifferent about food. Until he was a young man he delighted in drinking water, but that was natural to him (id illi patrium fuit). Yet not to seem singular or morose, he would hide his temperance from his guests by drinking out of a pewter vessel beer almost as light as water, or often pure water. It is the custom in England to pledge each other in drinking wine. In doing so he will merely touch it with his lips, not to seem to dislike it, or to fall in with the custom. He likes to eat corned beef and coarse bread much leavened, rather than what most people count delicacies. Otherwise he has no aversion to what gives harmless pleasure to the body. He prefers milk diet and fruits, and is especially fond of eggs.

"His voice is neither loud nor very weak, but penetrating; not resounding or soft, but that of a clear speaker. Though he delights in every kind of music he has no vocal talents. He speaks with great clearness and perfect articulation, without rapidity or hesitation. He likes a simple dress, using neither silk nor purple nor gold chain, except when it may not be omitted. It is wonderful how negligent he is as regards all the ceremonious forms in which most men make politeness to consist. He does not require them from others, nor is he anxious to use them himself, at interviews or banquets, though he is not unacquainted with them when necessary. But he thinks it unmanly to spend much time in such trifles. Formerly he was most averse to the frequentation of the court, for he has a great hatred of constraint (tyrannis) and loves equality. Not without much trouble he was drawn into the court of Henry VIII., though nothing more gentle and modest than that prince can be desired. By nature More is chary of his liberty and of ease, yet, though he enjoys ease, no one is more alert or patient when duty requires it.

"He seems born and framed for friendship, and is a most faithful and enduring friend. He is easy of access to all; but if he chances to get familiar with one whose vices admit no correction, he manages to loosen and let go the intimacy rather than to break it off suddenly. When he finds any sincere and according to his heart, he so delights in their society and conversation as to place in it the principal charm of life. He abhors games of tennis, dice, cards, and the like, by which most gentlemen kill time. Though he is rather too negligent of his own interests, no one is more diligent in those of his friends. In a word, if you want a perfect model of friendship, you will find it in no one better than in More. In society he is so polite, so sweet-mannered, that no one is of so melancholy a disposition as not to be cheered by him, and there is no misfortune that he does not alleviate. Since his boyhood he has so delighted in merriment, that it seems to be part of his nature; yet he does not carry it to buffoonery, nor did he ever like biting pleasantries. When a youth he both wrote and acted some small comedies. If a retort is made against himself, even without ground, he likes it from the pleasure he finds in witty repartees. Hence he amused himself with composing epigrams when a young man, and enjoyed Lucian above all writers. Indeed, it was he who pushed me to write the "Praise of Folly," that is to say, he made a camel frisk.

"In human affairs there is nothing from which he does not extract enjoyment, even from things that are most serious. If he converses with the learned and judicious, he delights in their talent; if with the ignorant and foolish, he enjoys their stupidity. He is not even offended by professional jesters. With a wonderful dexterity he accommodates himself to every disposition. As a rule, in talking with women, even with his own wife, he is full of jokes and banter.

"No one is less led by the opinions of the crowd, yet no one departs less from common sense. One of his great delights is to consider the forms, the habits, and the instincts of different kinds of animals. There is hardly a species of bird that he does not keep in his house, and rare animals such as monkeys, foxes, ferrets, weasels and the like. If he meets with anything foreign, or in any way remarkable, he eagerly buys it, so that his house is full of such things, and at every turn they attract the eye of visitors, and his own pleasure is renewed whenever he sees others pleased."
There is no similar description of the godly bishop, St. John Fisher; however, in his correspondence, St. Thomas More wrote these words about him:

"I reckon in this realm no one man, in wisdom, learning, and long approved virtue together, meet to be matched and compared with him."
O God, who didst raise up amongst the English people thy blessed Martyrs St. John Fisher and St. Thomas More in defense of the faith and in witness to the dignity of Apostolic Authority: grant by their merits and prayers; that in the profession of one faith we may all be made one in Christ, and in Him continue to be at one with one another. Through the same Jesus Christ thy Son our Lord, who liveth and reigneth with thee in the unity of the Holy Ghost, ever one God, world without end. Amen.
Posted by Fr. Christopher George Phillips at 10:06 AM