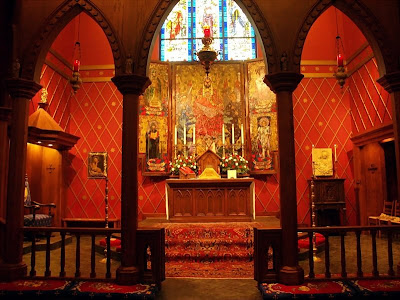 From the Holy Father's letter at the beginning of the Year for Priests:

Saint John Mary Vianney taught his parishioners primarily by the witness of his life. It was from his example that they learned to pray, halting frequently before the tabernacle for a visit to Jesus in the Blessed Sacrament. “One need not say much to pray well” – the Curé explained to them – “We know that Jesus is there in the tabernacle: let us open our hearts to him, let us rejoice in his sacred presence. That is the best prayer." And he would urge them: “Come to communion, my brothers and sisters, come to Jesus. Come to live from him in order to live with him… “Of course you are not worthy of him, but you need him!”. This way of educating the faithful to the Eucharistic presence and to communion proved most effective when they saw him celebrate the Holy Sacrifice of the Mass. Those present said that “it was not possible to find a finer example of worship… He gazed upon the Host with immense love”. “All good works, taken together, do not equal the sacrifice of the Mass” – he would say – “since they are human works, while the Holy Mass is the work of God”. He was convinced that the fervour of a priest’s life depended entirely upon the Mass: “The reason why a priest is lax is that he does not pay attention to the Mass! My God, how we ought to pity a priest who celebrates as if he were engaged in something routine!”. He was accustomed, when celebrating, also to offer his own life in sacrifice: “What a good thing it is for a priest each morning to offer himself to God in sacrifice!"
As I read that section of the letter, all I could do was say, "yes, yes, yes!" I would imagine most of us priests who are converts had our journey fueled by an overwhelming love for Christ in the Mass. Of course, I can't speak for others, but the moment I began to wonder about the validity of what I was celebrating as an Episcopalian, I knew it was time for me to leave. I mean no disrespect to sincere Anglicans, but I knew I needed the objective Reality found in the tabernacles of the Catholic Church. And even though I was certain of my vocation to the priesthood, if the Church had not confirmed that vocation, I would not have broken stride for a moment in my journey home to the Church. I was a starving child, and I knew where they kept the Food.

And now, to have the unspeakable privilege and joy of celebrating the Mass every day and of bringing Christ the Lord to the people I love... well, it humbles me and it thrills me. As I've said on many an occasion: after more than a quarter of a century as a priest, I still look forward to my alarm going off in the morning.
Posted by Fr. Christopher George Phillips at 9:35 PM