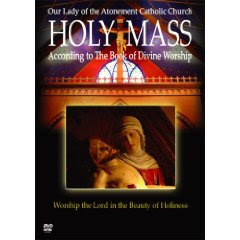 There's some very interesting discussion over on Fr. Longenecker's blog. He's been writing about the Anglican Use, and musing about why more Anglicans don't take advantage of what the Catholic Church offers through the Pastoral Provision and the liturgical use found in the Book of Divine Worship.

Many of the comments are very interesting, and they touch on several things. One comment points out that the Book of Divine Worship is just the Catholic Mass "gussied up to look Anglican." Quite true: it is the Catholic Mass. But it's not just "gussied up." It's actually making ancient prayers, expressed in the highest form of our English language, once again an official part of the Church's public liturgy. Very few of the prayers we use are originally Anglican; the vast number of them are centuries-old prayers that had been ripped from their original Catholic home. All we're doing is restoring them to their true context.

Another commenter pointed out that there are some "modern sections" in the Book of Divine Worship, and expressed surprise that we would have allowed such a thing. Indeed, there are some portions which are jarringly modern, taken directly from the Roman Sacramentary. Believe me, that wasn't our choice. I served on the Vatican's special commission which had the responsibility of compiling our liturgical use. If I'd had my way, we would have simply brought in the Anglican Missal with the Gregorian Canon. But since I don't have that kind of authority, it wasn't my decision. All I could do was propose; there were plenty of others on the commission who were more than happy to dispose.

We got what we got, and those of us who pray with this liturgy are delighted we were given as much as we were. And happily, there's some indication that a future revision isn't out of the question.
Posted by Fr. Christopher George Phillips at 9:41 PM