For Sale: Not Cheap 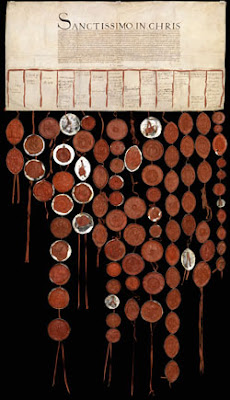 Here's a document that nudged history in a direction which led to schism for a nation, a series of unhappy royal marriages, and martyrdom for many. It's the document written in 1530 by members of the English nobility and clergy, urging Pope Clement VII to declare the marriage between King Henry VIII and Catherine of Aragon to be null. The document has eighty-five wax seals attached, of which eighty-one are preserved. The seals are formed from more than six pounds of wax, and each one shows the heraldic symbol and rank of the signer. The Pope didn't grant the annulment, because there were no legitimate grounds for a decree of nullity. That, of course, didn't stop King Henry. And the rest, as they say, is history.

The document, part of the Vatican Secret Archives, is in the news because it has just been meticulously restored. Why now? Because it coincides with the five hundredth anniversary of Henry's coronation. Not only has the document been restored, but exact replicas are being produced. One copy is done, and there will be 199 more made. The good news is that you can buy one. The bad news is that each copy costs $68,000.00.
A pretty expensive legacy, no matter how you look at it.
Posted by Fr. Christopher George Phillips at 9:44 PM