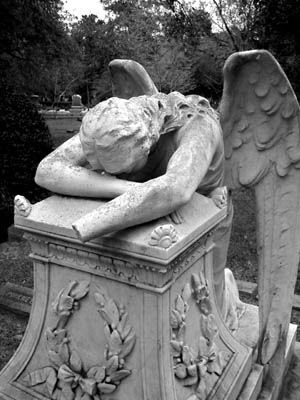 There has been an abundance of stories written about Alberto Cutié, the Catholic priest who abandoned his vows in a misguided attempt to find personal fulfillment. The following commentary comes from the Rev. Canon J. Gary L'Hommedieu, Canon for Pastoral Care at the Episcopal Cathedral Church of St. Luke, Orlando, Florida. It appears on the website of VirtueOnline.org, a site for conservative Anglicans, and I'm including it here, not because I think the subject needs more exposure, but because it's encouraging to know that there are Episcopalians who are as scandalized by this as we are.

INCLUSIVENESS AND ORDINATION VOWS: The Latest in TEC Stand Up Comedy

"Hey, that Padre Alberto is some 'cutie'. Get it?"

I can't help but think we're supposed to be laughing out loud over this latest attempt at self-promotion by the Episcopal Church.

TEC's latest foray into the public eye is a slight variation on a major theme in postmodern Americana--the Catholic priest who falls in love with the nun next door and lives happily ever after in the Episcopal Church.

Well, that's the normal pattern. The present story is a little off the beaten track, involving a priest and a divorcée. Father Alberto Cutié, affectionately known as "Padre Alberto", was recently received into the Episcopal Church along with his fiancée. The two of them are preparing to make serious vows before God in their new ecclesiastical home: marriage vows for the two of them, and for him priestly vows in the Episcopal Church.

At present we only know one thing about Padre Alberto, aside from the fact that he is related to pop stars and that he hangs out with Miami's glitterati. Those are all externals. What we know about his interior life is, of course, hard to read, and it's not really anybody's business to go passing judgment.

The one thing we know as a matter of fact, not based on anyone's judgment or opinion, is this: he doesn't keep the vows he makes before God.

The present drama is a fascinating variation of the above-mentioned formula: it's about "finding religion" in today's Episcopal Church. It began when local news photographers snapped photos of Padre Alberto and his fiancée "finding religion" on a public beach in Miami.

TEC officialdom is very happy about this "conversion" story, though they're not entirely sure which angle to play up. What is clear to TEC news hounds is that some sort of liberation has taken place, and now they must guide us in rejoicing.

The Episcopal News Service saw this as a classic human-interest story that "resonates worldwide".

"Within the whole Hispanic tradition there is a respect for romance between men and women, and Cutié is a living example of that," comments the Rev. Paul Barton, director of Hispanic church studies at the Seminary of the Southwest in Austin, Texas.

Funny, I thought Hispanics were traditionally respectful the place of the church in their local communities. Clearly the romance tradition trumps the religious tradition, according to the Episcopal News Service report.

The real drama is how this story resonates with the epic of liberation reverberating amongst the communities of the world's oppressed, or at least among Western intellectuals who have named themselves their spokesmen. Rev. Barton puts his finger on it:

"He is seen in a heroic way, standing up for his right to exercise his sexuality."

Padre Alberto is the new David who mustered supernatural courage in standing up to that ancient Goliath, the Roman Catholic Church, which seeks only to degrade human nature by imposing vows of celibacy on its clergy.

The fact that Father Cutié took a vow of celibacy of his own free will does not enter into this contrived drama. We're not interested in the sort of freedom where people freely act and then are held accountable for their free choices. Those who spout the bourgeois rhetoric of accountability merely seek to exploit the labor of the masses.

This is the era where shaking your fist at any authority for any cause is equated with liberating the downtrodden--at least it is by tenured professors and pensioned clerics in America's cultural mainstream.

I can't say I blame the good Father for wanting to live a non-celibate life. I'm happy that he has found a soul mate. I hope things work out for the two of them. I hope his wife-to-be eventually finds she can take him at his word.

I have no interest in judging Father Cutié for breaking his vow to the Church. Here's my problem. If someone breaks a promise on Monday and makes the same promise again on Tuesday, it is not possible for me to believe his second promise. It has nothing to do with judging him. It is possible to forgive him for breaking his promise, but it is not possible to believe the next several promises he makes, particularly if they reinforce the perception that he is acting out of pure self-aggrandizement. The burden of credibility is on him. Such a conclusion is not a moral judgment but the only possible interpretation of his own actions.

All this could change. God Himself may intervene in the life of this gifted and well-intentioned media zealot and shake him to the core. He may become known as a giant of integrity and a man of his word. But that won't happen the same week he makes headlines for fondling a woman in a public place and then launches a strategy to recover his reputation.

If there's any scandal in this story, it has nothing to do with illicit romance or broken promises. The scandal is the rapacity of the Episcopal Bishop of Southeast Florida in milking the spotlight for the purposes of his own ambition. It is scandalous that he thinks so little of the public that they can be fooled by empty words like "inclusiveness" in explaining the meaning of what is only too obvious.

Both Bishop Frade and Father Cutié have much to gain by their new alliance. The good Father gets to practice his profession and enjoy an increased notoriety in his elite circle of friends. The Bishop gets to stand in the shadow of a global celebrity and be hailed as a liberator of the oppressed merely for dribbling platitudes. Rarely have two human beings ever gained so much at so little personal cost and risk.

Who knows, maybe both these men will get religion someday. Unfortunately, it would take a long time before anyone could believe it, even if they wanted to.
Posted by Fr. Christopher George Phillips at 8:21 AM