A soldier of Christ... 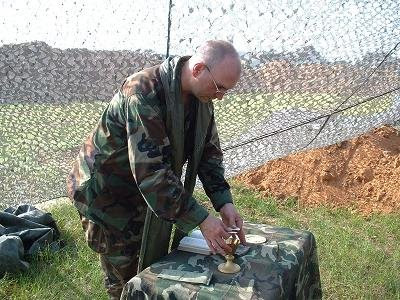 At the beginning of the Year for Priests, pray for the repose of the soul of a faithful servant of Christ. Fr. Timothy Vakoc was an Army chaplain, injured in Iraq in 2004. He died this past Saturday at the age of forty-nine.

It happened on May 29th, which was the twelfth anniversary of his priestly ordination. He had just finished celebrating Mass for the soldiers in Mosul when his vehicle was struck by a roadside bomb. He sustained serious brain injury, and one of his eyes was damaged beyond repair.

At first he was categorized by doctors as being in a "vegetative state," although he progressed and was recategorized as being in a "minimally responsive state." He was awarded the Purple Heart, the Bronze Star and the Combat Action Award. Father Vakoc's sister remembers him saying, "The safest place for me to be is in the center of God's will, and if that is in the line of fire, that's where I'll be."
It was nearly two and a half years before he was able to speak again, and just a few weeks ago, in a Mass celebrating the 17th anniversary of his ordination, he was able to sing and follow along with the prayers. He was even able to give a blessing with his partially impaired right arm. But complications set in, and his long struggle ended with his death on the Memorial of the Immaculate Heart of Mary. No doubt, our Lady joyfully received the soul of this brave priest - "a priest forever, after the order of Melchisidek."
Posted by Fr. Christopher George Phillips at 9:35 PM