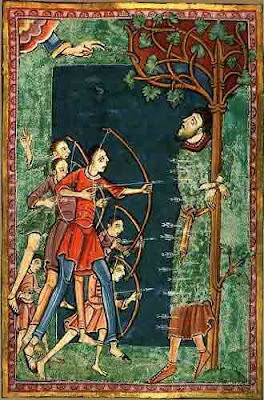 On November 20th we commemorate St. Edmund, King and Martyr, who lived in the 9th century. He was the king of East Anglia, an independent kingdom within the confederation of kingdoms which comprised England at that time. His name, Edmund, meant “noble protection,” and as an earthly king he certainly lived up to his name. He had a reputation for compassion and the protection of the weak, of widows and of orphans. His greatest challenge, however, was the invasion of his kingdom by the Danish Vikings. They weren’t complete foreigners to the people of East Anglia. They were of the same race, and in fact, their languages were so similar that they were able to understand one another. No, there was only one essential difference between the Danish Vikings and the English - the Vikings were heathens, and the English were Christians.

The Vikings attacked and destroyed churches and monasteries, homes and villages, all throughout the kingdom. King Edmund fought side by side with the great Christian King Alfred. Edmund did his best, but he was finally overwhelmed by the huge numbers of Danes. At Hoxne in the north of Suffolk, King Edmund was captured. The Danes made him an offer: he could renounce his faith and become a puppet-king under them, or he could die. For King Edmund that was no choice at all. He would never renounce his Catholic faith, and so he chose death. There is an eyewitness report from that time, and it tells how he was scourged and bound, then tied to an oak-tree where the Danes fired arrows at him as for target practice. Finally, after suffering immensely from his many wounds, King Edmund was beheaded. His body was thrown to the wild beasts, but his loyal subjects secretly found his body, entombed him in a small chapel, and there he rested among his people. As they sought his heavenly intercession, God sent blessings upon them, and Edmund continued to be king in their hearts, as their faith in Christ the King grew stronger and stronger.

O God of ineffable mercy, thou didst give grace and fortitude to St. Edmund the king to triumph over the enemy of his people by nobly dying for thy Name: Bestow on us thy servants, we beseech thee, the shield of faith, wherewith we may withstand the assaults of our ancient enemy; through Jesus Christ our Redeemer, who liveth and reigneth with thee and the Holy Spirit, one God, now and for ever. Amen.