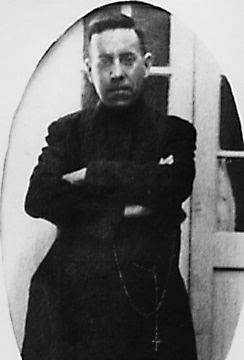 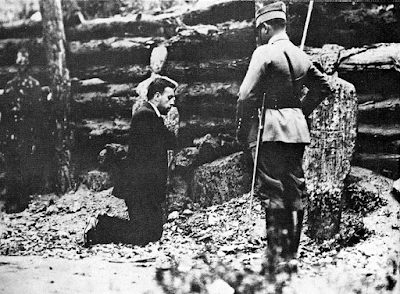 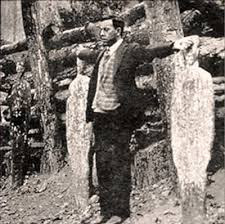 A little over a century ago in Mexico an evil and militantly anti-Catholic government instituted and enforced laws against the Church in an attempt to completely erase the Catholic faith in that country. Baptisms were declared illegal; celebrating Mass was illegal; training men for the priesthood was illegal.

Resistance to this took different forms. Some were militant in their protests, taking up arms; others resisted peacefully. Huge numbers, both clergy and laity, were martyred. Today we remember one of them – a priest, Fr. Miguel Augustin Pro.

He was born in 1891, and from his childhood he was known for his happiness and his wonderful sense of humour. He was raised in a devoutly Catholic family, and at the age of twenty he became a Jesuit novice. He soon went into exile because of the Mexican revolution. He traveled to the United States, to Spain, to Nicaragua, and then to Belgium, where he was ordained to the priesthood in 1925.

He suffered greatly from a severe stomach problem which required several operations, but when his health did not improve, in 1926 his superiors allowed him to return to Mexico in spite of the religious persecution in the country.

The churches were closed and the priests ministered quietly and always in great danger. Father Pro spent the rest of his life in a secret ministry to the Faithful. In addition to fulfilling their spiritual needs, he also carried out the works of mercy by assisting the poor of Mexico City with their temporal needs. Many times he adopted disguises so that he could pass unnoticed.

The day came when he was betrayed to the police, being falsely accused of a bombing attempt. He was sentenced to death with no trial. On November 23rd, 1927, the day of his death, Father Pro forgave his executioners, he prayed, he refused the blindfold, and he died proclaiming “¡Viva Cristo Rey!,” (“Long live Christ the King!”).

The faith was not destroyed in Mexico. In fact, the Church continued to grow. The lively faith among the Catholics in Mexico today was purchased by the blood of brave souls like Blessed Miguel Pro, who would rather die than deny their faith in God.

Our God and Father, who didst confer upon thy servant Blessed Miguel Agustín Pro the grace of ardently seeking thy greater glory and the salvation of others: grant, through his intercession and example; that by faithfully and joyfully performing our daily duties and charitably assisting those around us, we may serve thee with zeal and ever seek thy glory; through Jesus Christ thy Son our Lord, who liveth and reigneth with thee, in the unity of the Holy Spirit, ever one God, world without end. Amen.