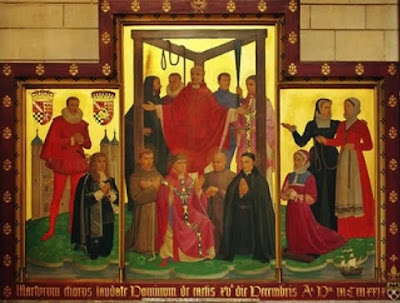 The English Martyrs include 284 men and women who gave their lives during the 16th and 17th centuries. They were martyred simply because they remained steadfast in their Catholic faith. What had happened?

King Henry VIII had proclaimed himself supreme head of the Church in England, claiming for himself and his successors power over his subjects not only in civil matters, but also in spiritual things. He took to himself a spiritual power that can belong only to the Pope as the Vicar of Christ and Successor of St. Peter. The Catholics at that time wanted to be loyal subjects of the Crown, but their consciences could not allow them to grant the power of spiritual supremacy. It is as though, in the United States, the president and Congress took upon themselves the power to determine what we as Catholics believe, and how we worship. We could not allow Congress to pass laws that changed the Church’s teaching about the Mass, or what we believe about God. But this was what had happened in England and Wales. This was what led many people to face death courageously rather than act against their consciences and deny their Catholic faith.

This firm attitude in defense of their freedom of conscience and of their faith in the truth of the Holy Catholic Church is identical in all these Martyrs, although they were a diverse group of people – priests, religious, laymen, housewives and mothers, some highly educated, some very simple laborers. But they all shared the same faith, and the same determination to keep that faith – and for that, they were put to death. And this persecution was not only under Henry VIII, but it continued under Elizabeth I and her successors, all the way into the Commonwealth under Cromwell.

The torments they endured were horrible. Most of them were killed in extremely violent ways – the priests, for instance, were hanged, drawn and quartered. Others were tortured for long periods of time before their deaths. But every one of them remained steadfast in their Catholic faith, and they died praying for their executioners, and even praying for the monarch who had ordered their deaths.

O Merciful God, who, when thy Church on earth was torn apart by the ravages of sin, didst raise up men and women in England who witnessed to their faith with courage and constancy: give unto thy Church that peace which is thy will, and grant that those who have been divided on earth may be reconciled in heaven and be partakers together in the vision of thy glory; through Jesus Christ thy Son our Lord, who liveth and reigneth with thee, in the unity of the Holy Spirit, ever one God, world without end. Amen.