St. Bede in the Triptych 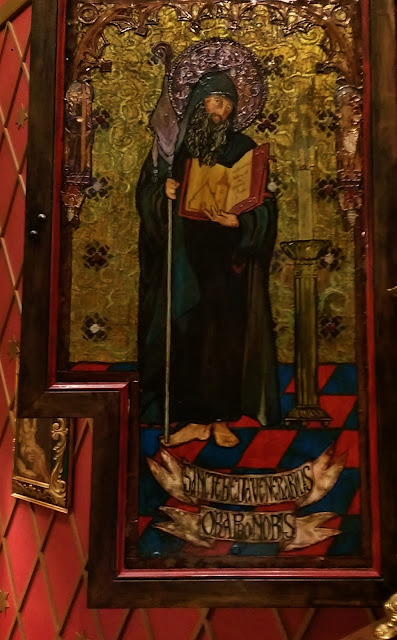 St. Bede is one of the five major figures depicted on the large triptych which is over the High Altar at Our Lady of the Atonement Church. The following is taken from the fuller description of the triptych, which can be found in its entirety at this link.

Although very little is known about Saint Bede, we do know that he was a monk of the monastery of Sts. Peter and Paul at Wearmouth and Jarrow, where at the age of seven he had been given into the care of the abbot. His monastic life was uneventful, and we can sum it up in his own words: “I have spent the whole of my life devoting all my pains to the study of the Scriptures, and, amid the observance of monastic discipline and the daily task of singing in the church, it has ever been my delight to learn or teach or write.”

It was as a teacher and writer that Bede was supreme. He wrote both theological and secular works, prose and poetry. He was interested in science and the natural order. His historical writings are perhaps the best remembered. His chief work was The Ecclesiastical History of the English People, one of the most important historical writings of the early Middle Ages. It is the sole source for much information about the early Saxon history.

Saint Bede died at his work. On the Tuesday before Ascension Day he summoned the priests of the monastery, made them little gifts of paper and incense, and begged their prayers. At intervals during the next forty-eight hours, propped up in bed, he dictated to the last sentence an English rendering of the Gospel of Saint John upon which he was engaged at the onset of his illness. Finally, asking to be laid on the floor he sang the anthem “O King of Glory” from the Office of Ascension Day and died with the doxology, “Glory be to the Father, and to the Son, and to the Holy Ghost,” on his lips.

Bede is the only Englishman who was named by Dante in the Paradiso. Saint Boniface, when he learned of Bede’s death, said “The light, lit by the Holy Spirit for the good of the whole Church, has been extinguished.” In the reredos Saint Bede appears in his simple monastic garb. He was dedicated to the monastic office and to the life of prayer, thus his red prayer beads are shown in the folds of his habit. He carries the crosier, though he was never a bishop, to recall the bishop’s role of teacher and scholar, characteristics of Bede. He also carries an opened copy of his Ecclesiastical History, and the picture on the frontispiece is of the original small church of Our Lady of the Atonement, before its expansion. Next to him is the extinguished candle, recalling Saint Boniface’s words. At the top of the candlestick is the inscription of the doxology Bede was praying at the moment of death.

“Remember,” writes Cardinal Gasquet, “what the work was upon which Saint Bede was engaged upon his deathbed – a translation of the gospels into English …” But of this work “to break the word to the poor and unlearned” nothing is now extant.

O God, who hast caused thy Church to shine with the learning of blessed Bede thy Confessor and Doctor: mercifully grant that we thy servants may ever be enlightened by his wisdom, and holpen for his merits’ sake; through Jesus Christ thy Son our Lord, who liveth and reigneth with thee, in the unity of the Holy Spirit, ever one God, world without end. Amen.