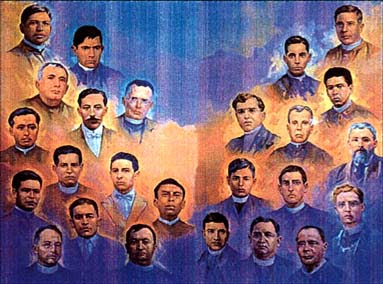 “¡Viva Cristo Rey!” (“Long live Christ the King!”). This was the cry of the “Cristeros,” Catholics who took up arms in the 1920’s in Mexico against the anti-Catholic government led by an evil man named Plutarco Calles, who had instituted and enforced laws against the Church in an attempt to completely erase the Catholic faith in Mexico. Baptisms had been declared illegal; celebrating Mass was illegal; training men for the priesthood was illegal, and the list went on and on.

There were others who resisted peacefully, and today we celebrate the martyrdom of St. Christopher Magallanes and 21 other priests as well as three lay companions, who were martyred between 1915 and 1937. They were executed by shooting or hanging, although they themselves had not taken up arms against the government. Their only crimes were that they were Catholic and they stood up for their faith. St. Christopher was a young man who was the pastor of the parish where he had been raised. When the seminaries were outlawed, he began a clandestine seminary. They had to do everything in secret, hiding from the government and moving from place to place. Young priests were trained, and bishops ordained them wherever they could find a hidden place to do it. As these priests were discovered, they would be arrested. They would be given either no trial, or a mock trial, and then they would be killed. Very often their bodies would be displayed as a warning to other Catholics. But before they died, they would cry out those words which gave hope and courage to those around them: “¡Viva Cristo Rey!,” (“Long live Christ the King!”).

The faith was not destroyed in Mexico. In fact, the Church continued to grow and continues on to this day. The lively faith among the Catholics in Mexico today was bought by the blood of these brave men, who would rather die than deny their faith in God.

This is a list of the Holy Martyrs of Mexico who were canonized by Pope St. John Paul II on 21 May 2000:


Almighty and eternal God, who madest Saint Christopher Magallanes and his Companions faithful to Christ the King even unto martyrdom: grant us, through their intercession; that, persevering in confession of the true faith, we may always hold fast to the commandments of thy love; through Jesus Christ thy Son our Lord, who liveth and reigneth with thee, in the unity of the Holy Spirit, ever one God, world without end. Amen.
Posted by Fr. Christopher George Phillips at 7:19 PM