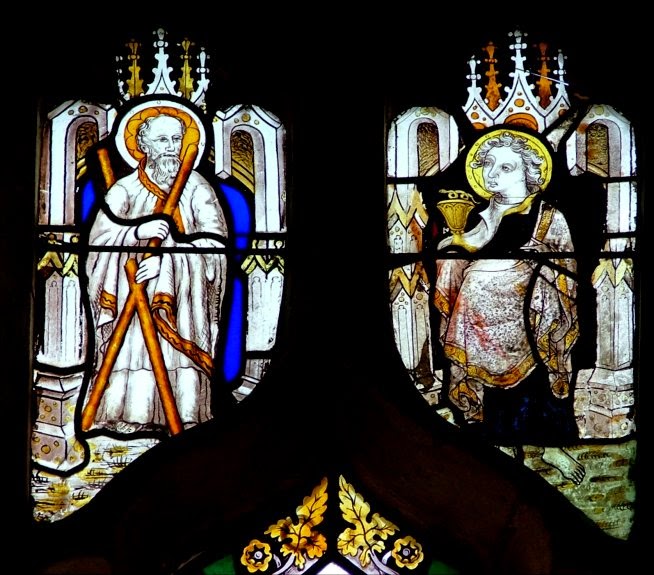 St. Philip was born in Bethsaida, Galilee. He may have been a disciple of John the Baptist and is mentioned as one of the Apostles in the lists of Matthew, Mark, Luke, and in Acts. Aside from the lists, he is mentioned only in John’s Gospel in the New Testament. He was called by Jesus Himself and brought Nathanael to Christ. Philip was present at the miracle of the loaves and fishes, when he engaged in a brief dialogue with the Lord, and was the Apostle approached by the Hellenistic Jews from Bethsaida to introduce them to Jesus. Just before the Passion, Jesus answered Philip's request to show them the Father, but no further mention of Philip is made in the New Testament beyond his listing among the Apostles awaiting the Holy Spirit in the Upper Room. According to tradition he preached in Greece and was crucified upside down at Hierapolis under Emperor Domitian.

St. James the Less, the author of the first catholic Epistle (that is, addressed to the Church generally), was the son of Alphaeus (also known as Cleophas). His mother Mary was either a sister or a close relative of the Blessed Virgin, and for that reason, according to Jewish custom, he was sometimes called the brother of the Lord. The Apostle held a distinguished position in the early Christian community of Jerusalem. St. Paul tells us he was a witness of the Resurrection of Christ; he is also a "pillar" of the Church, whom St. Paul consulted about the Gospel. According to tradition, he was the first Bishop of Jerusalem, and was at the Council of Jerusalem about the year 50. St. James was martyred for the Faith by the Jews in the Spring of the year 62. He was held in great respect by everyone, Jew and Gentile alike, which earned him the of "James the Just."

O Almighty God, whom truly to know is everlasting life: grant us perfectly to know thy Son Jesus Christ to be the way, the truth and the life; that, following the steps of thy holy Apostles, Saint Philip and Saint James, we may steadfastly walk in the way that leadeth to eternal life; through the same Jesus Christ thy Son our Lord, who liveth and reigneth with thee, in the unity of the Holy Spirit, ever one God, world without end. Amen.