You can fool some of the people all of the time... 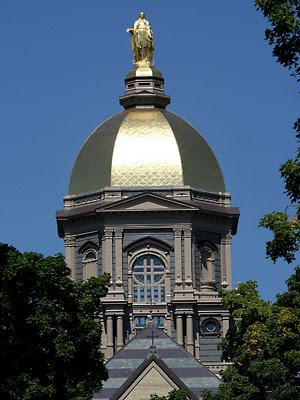 Here's an excellent article which appears in the Weekly Standard.

Duped at Notre Dame
Barack Obama says he wants abortion to be safe, legal, and rare, while doing everything in his power to advance it.

For a long time in America, the Religious Left, Catholics and Protestants alike, have been duped, played like fiddles. It happened again at Notre Dame yesterday.

President Barack Obama received an honorary degree amid a firestorm of controversy generated by his unprecedented extremism on abortion--an issue where he stands further to the left than any president in history, and in crystal-clear opposition to core Catholic Church social-moral teaching. Not one to back down, Obama addressed the matter head on at Notre Dame, feeding the faithful the left's standard abortion canard. He explained that he wants to "reduce the number of women seeking abortions."

This should have elicited gasps from an educated audience. After all, one of Obama's first acts as president--on January 23, the day after the annual March for Life in Washington--was signing the Mexico City policy. That means that groups like International Planned Parenthood will be subsidized with taxpayer dollars to perform and promote abortion overseas--to vigorously push for legalization, at all stages of pregnancy, in countries that have banned the procedure. Under relentless assault are nations like Mexico itself, home of Our Lady of Guadalupe, an image every faithful Catholic knows.

Recall, too, that on March 9, only a few weeks after rescinding the Mexico City policy, Obama authorized federal dollars to promote the deliberate destruction of human life at its earliest stage of development (as embryos) for research purposes. To borrow from Pope John Paul II, the state will thus deny its unborn this "first of freedoms," this most fundamental freedom, from which there can be no other freedoms--with your tax dollars.

Yes, yes. And so the crowd, en masse, let out a collective gasp, right? No.

When President Obama declared that his goal is to reduce abortions, the "social-justice" Catholics at Notre Dame clapped and cheered.

They were taken--hook, line, and sinker.

As I struggled to absorb this bewildering spectacle, I tried to think of a scenario more absurd. I thought of other presidents who spoke at Notre Dame: George W. Bush, George H. W. Bush, Ronald Reagan, Jimmy Carter. Obama's speech came close to one of his predecessors--Reagan--but only by reversing the terms; and then the absurdities snowballed into an avalanche.
Reagan, coincidentally, did Notre Dame's commencement the exact same day, on May 17, in 1981. It was one of his finest speeches, written by a Catholic speechwriter, Tony Dolan. It is most remembered for this passage:

The years ahead are great ones for this country, for the cause of freedom and the spread of civilization. The West won't contain communism, it will transcend communism.... It will dismiss it as some bizarre chapter in human history whose last pages are even now being written.

It was one of Reagan's first presidential predictions of communism's demise, and a prophetic one, dismissed by elites. Indeed, those last pages were being written, though no one else sensed or said it. Communism would not survive the decade.

It was a stunning declaration, both at the time and especially in retrospect. Notre Dame's graduates were treated with a historical gem, a truly special send-off. They witnessed a statement they now understand was profound.

And that was for reasons beyond that declaration, as Reagan challenged the graduating seniors to join him in this great cause. He drew on remarks by Churchill during the Battle of Britain: "When great causes are on the move in the world, we learn we are spirits, not animals, and that something is going on in space and time, and beyond space and time, which, whether we like it or not, spells duty."

To Reagan, their shared duty was to fight expansionistic, atheistic Marxism. Were they worthy of that challenge? He hammered home the theme with other quotes and metaphors, including a personal story from his movie, Knute Rockne, All-American.

Think of all this in light of Obama's comments. In Obama's speech at Notre Dame, the salient issue was abortion. For Reagan, it was communism. But unlike Obama with abortion, Reagan spoke with moral clarity--with firmness in the right as God gives us to see the right, as Lincoln once said--and then proceeded to do everything he could to halt the evil of communism, to reverse it, to stem the tide.

As Ronald Reagan spoke that day, he was laying out a multi-layered assault to win the Cold War, done through a group of key advisers: Bill Clark, Bill Casey, Cap Weinberger, Ed Meese, Jean Kirkpatrick, Richard Pipes. There was economic warfare. There was the aiding of rebels and freedom fighters from Poland to Afghanistan to Nicaragua. There was a rhetorical war to expose the inherent immorality of the Soviet system. There were crucial alliances, with Margaret Thatcher, with Pope John Paul II. There was peace through strength, from the 600-ship Navy to Pershing IIs to SDI. There were actual, official NSDDs, produced under Bill Clark's tutelage at the NSC, which articulated a formal policy of undermining Soviet communism and bringing "political pluralism" to Eastern Europe and the USSR itself.

My point with these examples--which is far from a comprehensive list--is that when Ronald Reagan spoke at Notre Dame on May 17, 1981, he was deadly serious about pursuing a course that would seek to achieve the goal he set forth in the speech: to dispatch communism to the ash-heap of history.

For Barack Obama, on the other hand, there is no such list for the goal that he articulated on abortion. Quite the contrary, beginning with his co-sponsorship of the so-called Freedom of Choice Act--which would abolish most of the few restrictions on abortion--or with promises he made to Planned Parenthood in July 2007 to require abortion coverage in his national health care plan--or, earlier, votes against the Born Alive Infants' Protection Act as a state senator in Illinois--Obama has done, or has promised to do, many things that would radically expand abortion to levels where it has never gone before in American history.

In a July 2007 speech, Obama described Planned Parenthood as a "safety-net provider." He believes that abortion services constitute a "safety net," and views abortion as a fundamental human right, one that he would like to sanctify with taxpayer funding. If Barack Obama got everything he ever wanted on abortion, we would face taxpayer funding of unlimited, unrestricted abortion at all stages of pregnancy at home and abroad.

That would not reduce the number of abortions.

Like many pro-choice politicians, Barack Obama says he wants abortion to be safe, legal, and rare, while doing everything in his power to advance it. He pays lip service to these canards when he needs political cover. Not surprisingly, that's what he did at Notre Dame on Sunday. Shame on Father Jenkins, the trustees, and the faculty, for giving Obama a podium--and honorary degree--to make fools of a sea of undergraduates at America's most celebrated Catholic college.
It would be like Ronald Reagan at Notre Dame saying that he wanted to take down Soviet communism while simultaneously subsidizing it with taxpayer dollars throughout Eastern Europe and the USSR. It would be like Reagan calling on Gorbachev to tear down the Berlin Wall while sending in cement trucks and rolls of barbed wire.