Precious words from the archbishop... 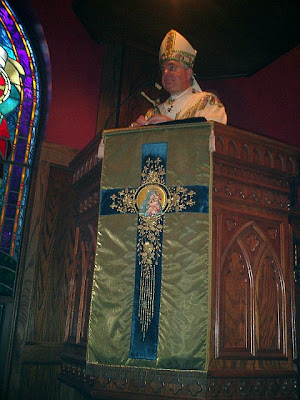 This sermon was preached by Archbishop Gomez at the parish a few years ago, on the occasion of our twenty-fifth anniversary.  It's good for us to remember what a faithful father-in-God he has been for us, and we pray for him as he prepares for his new and important work.

My brother Bishops, Priests, Sisters and Brothers in Christ,

Today as we gather for this special celebration it is providential that we celebrate the feast of St. Benedict. We can say that he is the Patron Saint of the Holy Father Pope Benedict XVI. So, we especially pray for the Holy Father and his universal ministry in the Catholic Church.

This past April Pope Benedict XVI discussed the influence St. Benedict had on Western Europe. The pope said that “with his life and work St. Benedict exercised a fundamental influence on the development of European civilization and culture” and helped Europe to emerge from the “dark night of history” that followed the fall of the Roman empire.

As you probably know, also on this very day, July 11, 1533, exactly four hundred and seventy five years ago, Pope Clement VII formally excommunicated England’s King Henry VIII for remarrying after his alleged divorce from his legitimate wife, Catherine of Aragon. He also excommunicated the Archbishop of Canterbury, Thomas Cranmer, and withdrew the papal nuncio from England. This day of infamy marks the day in which England formally fell out of communion with Rome.

All this occurred 475 years ago. I therefore find it rather appropriate that on the feast of St. Benedict, we are gathered together today in the name of Christ and in the name of the Catholic Church as a witness to the beautiful reality of what was once Catholic England, and now is the Pastoral Provision for the Anglican Use established by our beloved Pope John Paul II, and in the Archdiocese of San Antonio by my predecessor, Archbishop Patrick Flores who, twenty-five years ago, decided to erect this personal parish of Our Lady of the Atonement in which many of the elements of English Catholicism are preserved and given new life in the Catholic Church.

Those of you here who possess an appreciation for Church history will realize the significance of today’s Gospel as it prophecies against kings who shall persecute the faithful.

In today’s Gospel, Christ warns his followers, “You will be dragged before governors and kings for my sake.” As we celebrate this year’s Anglican Use Conference, we might remember the namesake of the most recent pastoral provision parish, that of Saint Thomas More in Scranton, Pennsylvania. Saint Thomas More, as we all know, was an English Catholic who held true to the Catholic Faith. Two years after the papal decree, Thomas More would receive a martyr’s reward for his fidelity to the Pope in Rome.

The Pastoral Provision looks back to those sorrowful days and seeks to provide a way for the children of Henry’s “Church of England” to return once more to the universal embrace of Rome. Many of you here today are converts from Anglicanism of one sort or another. Some of you are former Anglican clergy. Perhaps, you were not “dragged before governors and kings” for the sake of Christ, but some of you were persecuted.

Some of you offered up your vocations and others of you may have received harsh words from friends and family members who could not understand your decision to enter into full communion with the Catholic Church. Nonetheless, today we stand around the altar of Christ and we receive the consolation of Heaven.

In the past two years, Pope Benedict XVI has increasingly centered the Church’s attention on the mystery of the Church’s communio. Our Holy Father reminds us that we must be one in Christ and this union is ratified every time we celebrate the Holy Eucharist. Moreover, our union with one another is further realized when at each Mass, the celebrant invokes the name of the Holy Father in Rome.

Although we may share liturgical variations, we are united in the Eucharist and we celebrate our communio with one another by being in constant communion with our bishops and, ultimately, with the successor of Saint Peter.

In his recent Apostolic Visit to the United States, Pope Benedict XVI left us some challenges. One of them is the promotion of unity in the Church. In his homily at the Mass in Washington, DC, he said: “As the church in the United States gives thanks for the blessings of the past 200 years, I invite you, your families, and every parish and religious community, to trust in the power of grace to create a future of promise for God's people in this country. I ask you, in the Lord Jesus, to set aside all division and to work with joy to prepare a way for him in fidelity to his word and in constant conversion to his will. Above all, I urge you to continue to be a leaven of evangelical hope in American society, striving to bring the light and truth of the Gospel to the task of building an ever more just and free world for generations yet to come” (4/17/08).

We just heard the words of the Prophet Hosea who said:

“Let the wise man understand these words.
Let the intelligent man grasp their meaning.
For the ways of the Lord are straight,
and virtuous men walk in them”

Let us take Hosea’s words to heart today. The way of the Lord is straight. Let us recommit our lives to Christ this day and continue together along the narrow way of salvation drawn out for us by holy men and women, such as St. Benedict, Thomas More, Cardinal Newman and many others, to the gates of Heaven.

And let us share with all those who treasure the Anglican traditions the joyous conviction that the new Israel draws its life from the fullness of communion in the Word of God, in the Eucharist and with the See of Peter.

Let me finish invoking the intercession of Mary Our Blessed Mother for each one of us, for the Pastoral Provision, for the Catholic Church in the United States and for the Universal Church.

To her, Mary, Our Lady of the Atonement was dedicated this Parish, the first one of the Pastoral Provision. May she continue to accompany us in our journey of faith, hope, unity and love and for the greater glory of God. Amen.

This is today's press release from the Archdiocese of San Antonio:


Archbishop José Gomez named to be successor
to Cardinal Mahony upon his retirement
as Archbishop of Los Angeles.

The people of the Archdiocese of Los Angeles, the largest archdiocese in the United States, now know who will be the successor to Cardinal Roger M. Mahony upon his retirement. Archbishop José Gomez has been named the “coadjutor archbishop” of the Archdiocese of Los Angeles by Pope Benedict XVI, which carries with it the right of succession. As coadjutor archbishop, Archbishop Gomez will aid Cardinal Mahony in the governance of the diocese and would take his place if he is absent or impeded. The appointment was made public by the Vatican this morning at 5 a.m. San Antonio time,

The Vatican did not name a successor to Archbishop Gomez when making the announcement.

An Archdiocesan Administrator will be named on an interim basis upon Archbishop Gomez’s departure. When the new archbishop will be named is not certain, but it could take at least 6 months to a year. The Archdiocese of Los Angeles will celebrate a Mass of Welcoming at the Cathedral of Our Lady of the Angels on May 26th at 2 p.m. There will be a Mass of thanksgiving and farewell for Archbishop Gomez in San Antonio. Details will be announced

An archdiocesan administrator must be a priest of at least 35 years of age. While there are limitations placed on him by Church law, the administrator generally has the same responsibilities and authority as an archbishop.

Cardinal Mahony, a native Angelino, was appointed archbishop of his home diocese by Pope John Paul II in 1985. He was elevated to cardinal in 1991.

Today, as Archbishop Gomez was introduced to the Los Angeles media at a press conference, he said; “I’m very grateful to the Holy Father for giving me this opportunity to serve the Church with a mentor and leader like Cardinal Roger Mahony. I’m grateful to the Apostolic Nuncio, Archbishop Pietro Sambi, for supporting the Holy Father’s confidence in me. I will try with all my strength to earn that trust.”

Gomez also expressed sadness and gratitude as he prepares to leave San Antonio, “The people of San Antonio have a special goodness and grace that will always keep them close to me in my heart. In their patience and generosity, they taught me how to be a bishop. I will never forget them, and I will never stop thanking God for the privilege of having served them.”
Posted by Fr. Christopher George Phillips at 10:07 PM