The main headline on the front page of this morning's Express-News screams, "Priest named in sexual abuse lawsuit."  We're also informed that Archbishop Gomez is named as a defendent, because he tried to conceal the abuse being carried out by this priest.

You don't see stuff like that without your heart leaping into your throat, wondering what fresh hell this could be... until you read a bit further.

It seems this isn't a new case.  It's from a few years ago, and we'd all heard about it as it was unfolding.  The moment the allegation was brought forth, the archbishop revoked archdiocesan faculties from the priest and removed him from any work in the archdiocese.  The priest isn't an archdiocesan priest, but is a member of a religious order, and his order has also removed him from any and all priestly ministry.  The initial complaint said nothing about sexual abuse, but had to do with "interference with child custody."  The accusations of sexual abuse were made later, and as they were raised with the archdiocese, the archbishop instructed the boy's family to report everything to the local law officers in Edwards County.  The county officials stated that the archdiocese has given complete cooperation with their investigations.

No one in the archdiocese - and certainly not the archbishop - took any part in concealing anything.  Swift and decisive action was taken.  If anything is moving slowly, it's the secular legal system. 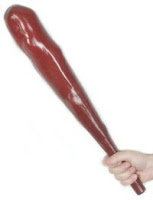 So, why the lawsuit and the screaming headline?  Could it possibly have anything to do with the archbishop's recent appointment to Los Angeles?  Could it in any way be related to the media campaign to smear the pope with something, anything?  Could it be that this stuff brings every looney-tune Catholic-hater out of the woodwork?  Nah.... d'you think?  As I said, timing is everything.

Look for more of this stuff.  Anybody can say anything, and they usually do.  If this nightmare happened to this boy - and it seems likely it did - then he deserves every bit of justice our legal system can provide.  But to accuse the archbishop of dishonesty and of organizing a cover-up is a blatant lie.  Justice has to work both ways.

But I guess when there's such a nice big stick handy, which so perfectly fits an attorney's grip, it's too tempting not to use it to beat up on that nasty ol' Church.
Posted by Fr. Christopher George Phillips at 10:08 AM