I can't say I'm thrilled with this news... 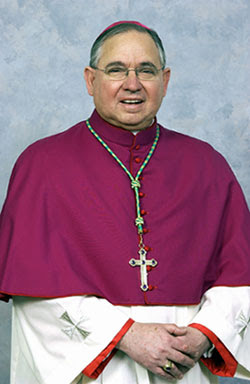 ...word is that Archbishop Gomez is being named Co-adjutor Archbishop of Los Angeles.  He's been our archbishop for only five years, and we really don't want him to leave.

Here's the story on Whispers in the Loggia:

For the nation's approximately 30 million Hispanic Catholics, a watershed moment is expected to come as soon as tomorrow, with the appointment of one of their own as the shepherd-in-waiting of continent's largest local church.

Corroborating word given to Whispers by a church official informed of the decision, New Advent's Kevin Knight cites unnamed sources to report that Pope Benedict will name Archbishop Jose Gomez of San Antonio, 58, as coadjutor-archbishop of Los Angeles.

In the process, the native of Mexico -- the lone American bishop professed as a "numerary" (full-member) of Opus Dei -- will make history, becoming the first Hispanic prelate placed in line for a Stateside red hat.

The appointment would bring to a close several months' worth of intense consultation and speculation alike following Cardinal Roger Mahony's request for an understudy last fall. A coadjutor would first assist, then succeed the cardinal -- who turned 74 in late February -- at the helm of the 5 million member local church, its Catholic population three-quarters Latino.

Word of the impending appointment began surfacing over the weekend. Multiple calls to the LA archdiocesan spokesman made through the day remained unreturned as of press time.

Born in Monterrey and ordained for Opus Dei in 1978, Gomez served in Texas from 1987 in both Houston and San Antonio. A former executive director and president of the National Association of Hispanic Priests, in 2001 Pope John Paul II named him an auxiliary to Archbishop Charles Chaput of Denver, then rocketed him into the lone senior US post customarily held by a Latin cleric on his appointment to San Antonio in late 2004.

In the USCCB, the archbishop serves as chair of the bench's Committee on Cultural Diversity in the Church and the body's Subcommittee on the Church in Latin America; in the latter capacity, Gomez led a three-bishop delegation to quake-ravaged Haiti to assess the situation in early March.

A tech and media-savvy prelate committed to the late pontiff's vision of a New Evangelization for the church, Gomez's vision of the church was thoroughly expressed in You Will Be My Witnesses a February pastoral letter "on the Christian Mission" published on his fifth anniversary as head of the 850,000-member San Antone church.

SVILUPPO: Additional confirmation given... Official: press conference scheduled for 10am PT tomorrow at Cathedral of Our Lady of the Angels.