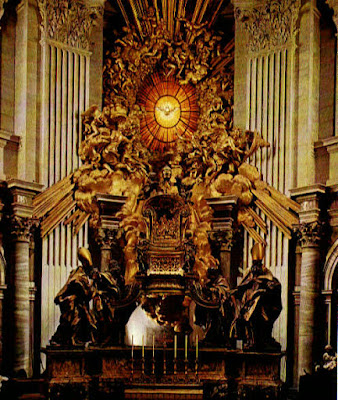 Almighty Father, who didst inspire Simon Peter, first among the apostles, to confess Jesus as Messiah and Son of the living God: Keep thy Church steadfast upon the rock of this faith, that in unity and peace we may proclaim the one truth and follow the one Lord, our Saviour Jesus Christ; who liveth and reigneth with thee and the Holy Spirit, one God, now and for ever. Amen.

Enshrined in the beautiful Bernini reliquary in St. Peter’s Basilica is a chair which was known in the sixth century, parts of which date to the earliest years of the Christian faith. This is the famous Chair of St. Peter, of which the feast is celebrated each year on February 22nd.

Why would the entire Catholic world celebrate a feast in honor of a chair? Surely it must be for a better reason than that an apostle sat on it. As interesting as that is, the reason is much greater than that alone. This Chair is the concrete symbol to us of the authority and primacy of St. Peter, the Prince of the Apostles, the one to whom our Lord entrusted the keys to the Kingdom of Heaven, and who was called the Rock on which Christ would build His Church.

The fragments of the Chair (cathedra) of St. Peter are venerated because it was from that very place that the first Pope, the Vicar of Christ, imparted the truth which had been entrusted to him by our Lord Himself, and which has been passed on in its entirety throughout the centuries, and which will continue until Christ returns in glory. The Chair of St. Peter is a reminder to us that we are not members of some man-made religion, but that we are part of the one true Church, founded by Christ upon the Rock which endures.
Posted by Fr. Christopher George Phillips at 10:10 PM