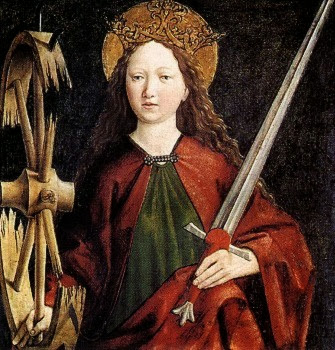 The account of the life and death of St. Catherine of Alexandria was recorded by Eusebius in about the year 320, just a few years after her martyrdom. Eusebius was the Bishop of Caesarea and is known as the "father of Church history."

Catherine was born of into a noble family of Alexandria, and from childhood she had devoted herself to study. Through her reading she had learned a great deal about Christianity, and was subsequently converted after being given a vision of Our Lady and the Holy Child Jesus.

When the Emperor Maxentius began his persecution against the Church, Catherine went to him and gave him a firm rebuke for his cruelty, after which she told him about Christ and the Gospel. The emperor could not answer her arguments against his pagan gods, so he gathered together fifty philosophers to argue against her. Quite the opposite happened, and they were won over by her reasoning. When the emperor learned that they all had become Christians, he had them burned to death.

He then tried to seduce Catherine with an offer to be his consort. She refused him, so he had her beaten and imprisoned. The Emperor went off to inspect his military forces, but when he returned he discovered that his wife Faustina and one of his high officials had been visiting Catherine and had been converted, along with the soldiers of the guard. They too were put to death, and Catherine was sentenced to be killed on a spiked wheel. As soon as her body touched the instrument of torture, the wheel broke into pieces. That did not stop her martyrdom, however, because the emperor ordered that she be taken to a place of execution, where she was beheaded.

St. Catherine of Alexandria could just as well be called St. Catherine the Brilliant because of her intellect and wisdom, along with her ability to explain the Catholic faith with great conviction. As many in her day discovered, to hear her expound upon the Gospel meant almost certainly that those who listened would be converted to follow Christ.

O GOD, whose dwelling-place is in the pure of heart: grant we beseech thee; that we who venerate the memory of the martyr Catherine, thy faithful bride, may have grace to follow the example of her holiness and courage; through Jesus Christ thy Son our Lord, who liveth and reigneth with thee, in the unity of the Holy Spirit, ever one God, world without end. Amen .

Posted by Fr. Christopher George Phillips at 5:10 AM