It is for the cause of unity... 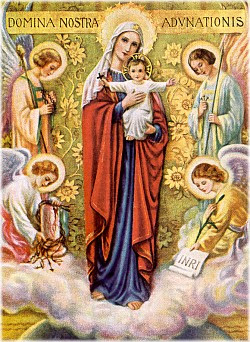 "When all things were in quiet silence and night was in the midst of her swift course, thine Almighty Word, O Lord, leaped down from heaven out of thy royal throne..." and that Word took flesh untainted by sin from the Virgin chosen from the beginning of time. It was done for the healing of that tragic rift between God and Man.

God created all things to be in perfect unity. He made the universe as a reflection of His own divine order. He created Man in His own image, to be in perfect communion with Him. But through the sin of our first parents, Adam and Eve, disorder entered into the world, and perfect communion was broken. Ever since that time there has been a tendency in the natural order of things for there to be disintegration, the breakdown of things, a crumbling. Sadly, what should be unnatural has become normal in the world around us, and within us, and even within the Church.

Christ founded the Church to be One, Holy, Catholic and Apostolic – and so it is. But our sin has caused division, and that is a clear contradiction to the Divine Will of our Lord. While there may be an invisible spiritual communion deeper than we know, especially through the bonds of baptism, nonetheless there is to be a visible communion also, because that is the Will of Christ, and the constant invitation from God is that we work and pray to build up both the spiritual and visible unity of Christ’s Body.

It is this purpose – the building up of unity – which is outlined at the very beginning of Pope Benedict’s Apostolic Constitution, Anglicanorum coetibus.  But even from the first days of its implementation this stated purpose has often been glossed over in the search for the particulars of the Personal Ordinariates.   So much time and energy has been spent on questions of who can belong, of the details of the liturgy, of who can be ordained - indeed, any number of other things – that the more important purpose of building up the unity of the Church sometimes is pushed to a lower place.

In fact, the very reason for the great generosity of the Church in giving us Anglicanorum coetibus is to help bring about the fulfillment of Christ’s prayer “that they all may be one.” It is not accidental that the first three paragraphs of the Apostolic Constitution speak of the Church as “a people gathered into the unity of the Father, the Son, and the Holy Spirit,” and that the Church was instituted by Christ as “a sacrament…of communion with God and of unity among all people,” and that this Church is governed by the successor of Peter and by the Bishops in communion with him. Then, recognizing that there are “many elements of sanctification and of truth [which] are found outside her visible confines,” Pope Benedict says that these “are forces impelling towards Catholic unity.”

What had been broken, the Church is inviting us to repair. The communion which has been impaired, we are being asked to restore. The fellowship which has been strained, we are being asked to strengthen.  This is a foundational purpose of the parishes and communities of the Ordinariates, using the tools of our heritage, our liturgy, our spirituality – indeed, our whole ethos – and already we can count in the thousands those who have been restored to the unity of Christ’s Holy Catholic Church through the ministry of the Pastoral Provision, and now the Ordinariates.

This is what is spoken to us through the Virgin Mary’s title of Our Lady of the Atonement: that we are to be “at one” with God and with one another.  The Blessed Mother shows us the way as she unites her human will with the Divine Will of the Triune God.  It would gladden her heart for her children to be one again. She, who stood beside the Cross and saw her Son in agony, would be comforted by us taking away this pain of separation. There are few things that touch a mother’s heart more than to see her whole family together at one table. This is why the Church has given us the Apostolic Constitution: so that we can put division behind us and join together with one voice and one heart in “that most holy cause, the preaching of the Gospel” to the whole world.

“Lord Jesus, make us one, as you and the Father are one.” Amen.
Posted by Fr. Christopher George Phillips at 8:47 AM