St. Thomas and the Crucifix 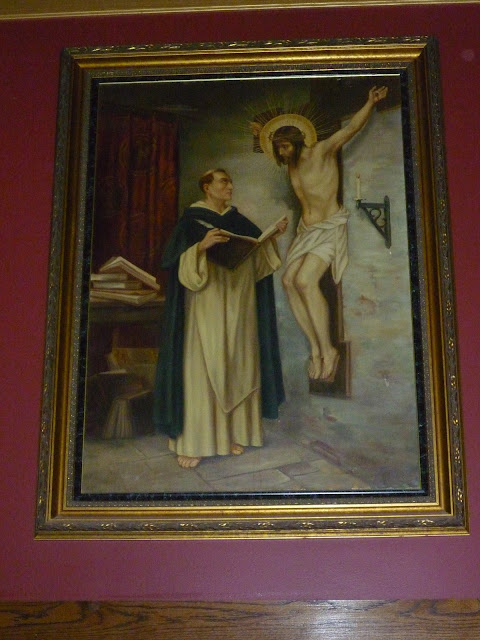 This large oil painting of St. Thomas Aquinas before the Crucifix hangs in the nave of the Church of Our Lady of the Atonement, and it depicts the occasion on which St. Thomas perceived a change in the crucifix before which he was praying. He heard Christ's voice saying, "You have written well of Me, Thomas. What would you desire as a reward?" Tearfully, Thomas replied, "Nothing, Lord. I do it all for you."

I was very moved by the story when I had first heard it, and was delighted to find an old painting which captured that conversation between Christ and His saint. It was on one of my adventures in "junk-shopping" several years ago. My family and I were visiting relatives in Connecticut, and I decided to poke around some of the local establishments calling themselves "antique shops." 99.9% of the stuff in those places is usually pretty awful, but there's always the chance of finding a treasure which I call "junque amongst the junk." This painting was one such piece of "junque," and I couldn't resist.

Unframed, covered with dust, and held on the wall with a couple nails in the top corners, it had come from a Catholic church in the area which had been "renovating." I asked the shop owner how much he wanted for it, and we began the bargaining ballet which is required in such places. "Too much," I said. Of course, he knew his initial price was too much. "How much will you give?" he asked. The dance was on. We went back and forth. He came down a little, but I wanted him to come down a lot. I feigned indifference about it, thanked him for his time, and went on my way. The shopkeeper knew what I was up to, but it was part of the choreography, and we both knew I'd be back. The next day when I entered his shop I asked him if he'd had people lined up to buy the painting. With a big smile, he said, "No," so I gave him my final offer, which he accepted -- high enough for him to make a profit, low enough for me to consider it a bargain.

The canvas was carefully rolled for transportation back to Texas. When we got home I gently cleaned it, and took it to Hobby Lobby (they do a great job of framing, in my opinion) to choose just the right frame to complement the painting. When I picked it up it came to the church to be placed in the spot where it now hangs. I'd chosen the location carefully, so that when a preacher is in the raised wineglass pulpit the image of St. Thomas Aquinas is directly across the nave. His image is there, as a reminder that he's always ready to intercede and to inspire as the word of God is preached.

How much did I pay for the painting? It wasn't cheap, but suffice it to say that the frame cost more than the picture.
Posted by Fr. Christopher George Phillips at 9:13 PM