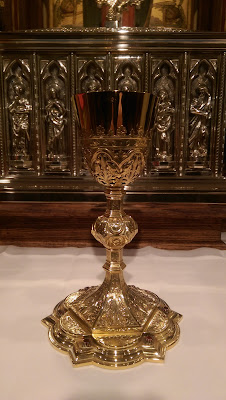 I had an old friend with me as I offered Mass this morning. Well, perhaps "friend" is too strong a word, but "companion" would fit.

I'm referring to my chalice. It had belonged originally to a Catholic priest whose name is now lost. It had found its way into an estate sale and a very close friend of mine obtained it and gave it to me. I was an Episcopal priest at the time. It was at that same time that I was considering seriously the possibility of entering the Catholic Church, and if God willed it, to become a Catholic priest under the terms of the Pastoral Provision.

The chalice itself is beautiful - gold, rather ornate, quite old, and very graceful in its design. I used it as an Episcopalian, and it came with us when we moved to Texas to begin the work of nurturing the small community while we waited to enter into full Catholic communion.

It continued to be used for all our Masses in the early years of the parish. But then, as happens over time, we obtained more chalices. Two of them came back with us from two different pilgrimages to Rome. Another was a gift to the parish. Soon my trusty companion found its way behind other chalices. It was safely stored in its cloth cover, but like its place in the back of the cabinet, it drifted into the back of my mind.

But recently I remembered it. Memories flooded into my mind of all the adventures and situations that chalice had seen with me. When I took it out of its cloth bag, its beauty struck me. It needed a little cleaning, which I happily did. When I offered the Mass this morning my chalice was restored to its proper place - not stored in a bag at the back of a shelf, but at the center of the celebration of the Mass.

As I was preparing it with the wine and water all the memories of where it had been with me flashed through my mind. My conversion, my first Mass, ministering to the little community at the beginning of our parish - all of it, and all of the wonderful people with me at those times, came into my heart.

When the chalice was elevated, containing Christ's Precious Blood, everyone who had been with me through everything up to that moment was lifted up. And with the lifting up, so God's blessings come down.

"Fear not, little flock; for it is your Father's good pleasure to give you the kingdom." -St. Luke 21:32
Posted by Fr. Christopher George Phillips at 6:33 PM