The Casting of Lots 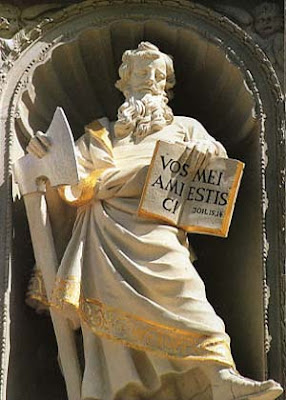 Even after thirty-three years as a Catholic, I still think of the Feast of St. Matthias as falling on February 24th, but upon reflection, I think the change in date was a good thing. Unless Ash Wednesday came especially late, St. Matthias' Day often fell within the Lenten season, but having it on May 14th means it’s closer to the time of the ascension – and historically it was soon after that event that the “casting of lots” took place. So I’ve adjusted myself to the kalendar.

St. Matthias had been a follower of Jesus and was probably one of the seventy-two disciples. After our Lord’s ascension into heaven, the nascent Church was gathered in prayer and St. Peter said that it was right to choose an apostle to replace Judas. He said it should be someone who had been with Jesus from the time of His baptism in the Jordan until the ascension. Two names were proposed: one was Matthias, and the other was Joseph, called Barsabbas (who was also called Justus). Both of them were good men, but since the Church needed only one, they prayed and asked God to reveal the right choice. This is where the “casting of lots” came in. Sometimes people have the mistaken notion that this was akin to gambling, or some kind of game of chance, and there are those who think perhaps it wasn’t the most appropriate means of determining God’s Will in the matter.

Actually, casting lots was a fairly common way of making a decision. When we look back through Scripture, we come across it pretty often. It was the method used to choose the scapegoat (Leviticus 16:8); it was used to determine the priests’ duties in the temple (I Chronicles 24:5); during the terrible storm at sea, poor Jonah was determined to be the guilty one by the casting of lots (Jonah 1:7). For us, it has the unsavoury connection with the crucifixion, since it was by casting lots that the soldiers divided our Lord’s clothing (St. Matthew 27:35). In the case of choosing a replacement for Judas, it was settled in this way because of the very fact that both candidates were equally good. Casting lots was done in different ways, but a common way of doing it was to put the necessary number of polished stones of different colour in a container, and to shake it until one stone fell out, determining the choice. Whatever we might think of the method, it certainly worked. St. Matthias proved to be such a good apostle that after spreading the Gospel in Cappadocia (modern-day Turkey), Egypt and Ethiopia, he was so successful he ended up being martyred for his efforts.

There are plenty of things we can get out of the account of the choosing of Matthias, but I like the thought that the dignity of apostleship seemed to hang by the thread of chance – and yet it wasn’t really chance, was it? God had His plan all worked out, and Peter (along with the others) knew that. They could have pushed their own human will and agenda into the situation: (“Hey, that Joseph Barsabbas is a really nice guy. Let’s choose him!”). In fact, the very fact that Christ’s original choice for that particular seat in the College of Apostles didn’t work out – at least by human standards – shows that God is very much in control of every detail. I mean, would we have planned things that way? The betrayal by Judas which led to the sacrifice which has atoned for man’s sin wouldn’t have been at the top of my list for a good plan. Finding an apostolic replacement by shaking some stones in a container isn’t something I would have thought of.

It seems like we’re rarely prepared for the twists and turns which define God’s plan, and yet that’s the way He works. Why are we surprised when things don’t follow the meticulous plan we’ve worked out in our own minds? After all, even our Lord Jesus Christ Himself prayed in Gethsemane, “Nevertheless, not My Will, but Thine be done.” And isn’t it our universal experience that, in the end, God’s plan is always best? Quite so.

O Almighty God, who into the place of the traitor Judas didst choose thy faithful servant Matthias to be of the number of the twelve Apostles: grant that thy Church, being alway preserved from false Apostles, may be ordered and guided by faithful and true pastors; through Jesus Christ thy Son our Lord, who liveth and reigneth with thee, in the unity of the Holy Spirit, ever one God, world without end. Amen.

Posted by Fr. Christopher George Phillips at 7:59 AM