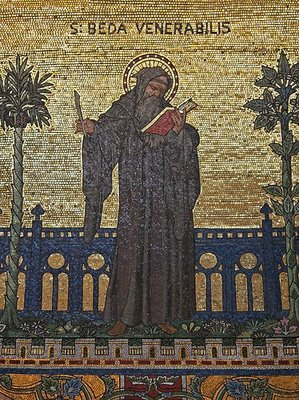 Bede is one of the few saints honored as such even during his lifetime. His writings were filled with such faith and learning that even while he was still alive, a Church council ordered them to be read publicly in the churches.

Bede was born near St. Peter and St. Paul monastery at Jarrow, England, and at an early age he was entrusted to the care of the abbot of the monastery. It was happy combination of Bede’s genius and the instruction he received from scholarly, saintly monks which produced a saint and an extraordinary scholar, perhaps the most outstanding one of his day. He became very learned in all the sciences of his times: natural philosophy, the philosophical principles of Aristotle, astronomy, arithmetic, grammar, ecclesiastical history, the lives of the saints and, especially, Holy Scripture. He was the first one to date historical events using the designation “A.D.” – Anno Domini. He was ordained as a deacon at the age of nineteen, and then as a priest at the age of thirty. From the time of his ordination to the priesthood until his death, he spent all his time writing, teaching and living the prayerful life of a Benedictine monk. Besides the many books that he copied, he composed 45 of his own, including 30 commentaries on books of the Bible.

His advice and spiritual guidance was sought out by kings and important leaders, including the Pope himself. Bede managed to remain in his own monastery till his death. Only once did he leave for a few months in order to teach in the school of the archbishop of York. Bede died in 735 praying his favorite prayer: “Glory be to the Father, and to the Son, and to the Holy Ghost. As it was in the beginning, is now, and ever shall be; world without end. Amen.”

O God, who hast caused thy Church to shine with the learning of blessed Bede thy Confessor and Doctor: mercifully grant that we thy servants may ever be enlightened by his wisdom, and holpen for his merits’ sake; through Jesus Christ thy Son our Lord, who liveth and reigneth with thee, in the unity of the Holy Spirit, ever one God, world without end. Amen.