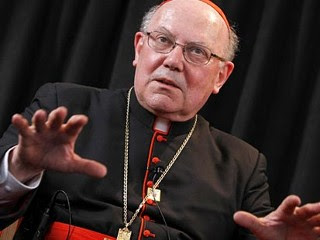 Cardinal Levada has written a terrific article which points out the vicious agenda the New York Times is carrying out against the Catholic Church, and our Holy Father in particular.

The New York Times and Pope Benedict XVI: how it looks to an American in the Vatican

By Cardinal William J. Levada
Prefect of the Congregation for the Doctrine of the Faith

In our melting pot of peoples, languages and backgrounds, Americans are not noted as examples of “high” culture. But we can take pride as a rule in our passion for fairness. In the Vatican where I currently work, my colleagues – whether fellow cardinals at meetings or officials in my office – come from many different countries, continents and cultures. As I write this response today (March 26, 2010) I have had to admit to them that I am not proud of America’s newspaper of record, the New York Times, as a paragon of fairness.

I say this because today’s Times presents both a lengthy article by Laurie Goodstein, a senior columnist, headlined “Warned About Abuse, Vatican Failed to Defrock Priest,” and an accompanying editorial entitled “The Pope and the Pedophilia Scandal,” in which the editors call the Goodstein article a disturbing report (emphasis in original) as a basis for their own charges against the Pope. Both the article and the editorial are deficient by any reasonable standards of fairness that Americans have every right and expectation to find in their major media reporting.

In her lead paragraph, Goodstein relies on what she describes as “newly unearthed files” to point out what the Vatican (i.e. then Cardinal Ratzinger and his Congregation for the Doctrine of the Faith) did not do – “defrock Fr. Murphy.” Breaking news, apparently. Only after eight paragraphs of purple prose does Goodstein reveal that Fr. Murphy, who criminally abused as many as 200 deaf children while working at a school in the Milwaukee Archdiocese from 1950 to 1974, “not only was never tried or disciplined by the church’s own justice system, but also got a pass from the police and prosecutors who ignored reports from his victims, according to the documents and interviews with victims.”

But in paragraph 13, commenting on a statement of Fr. Lombardi (the Vatican spokesman) that Church law does not prohibit anyone from reporting cases of abuse to civil authorities, Goodstein writes, “He did not address why that had never happened in this case.” Did she forget, or did her editors not read, what she wrote in paragraph nine about Murphy getting “a pass from the police and prosecutors”? By her own account it seems clear that criminal authorities had been notified, most probably by the victims and their families.

Goodstein’s account bounces back and forth as if there were not some 20 plus years intervening between reports in the 1960 and 70’s to the Archdiocese of Milwaukee and local police, and Archbishop Weakland’s appeal for help to the Vatican in 1996. Why? Because the point of the article is not about failures on the part of church and civil authorities to act properly at the time. I, for one, looking back at this report agree that Fr. Murphy deserved to be dismissed from the clerical state for his egregious criminal behavior, which would normally have resulted from a canonical trial.

The point of Goodstein’s article, however, is to attribute the failure to accomplish this dismissal to Pope Benedict, instead of to diocesan decisions at the time. She uses the technique of repeating the many escalating charges and accusations from various sources (not least from her own newspaper), and tries to use these “newly unearthed files” as the basis for accusing the pope of leniency and inaction in this case and presumably in others...