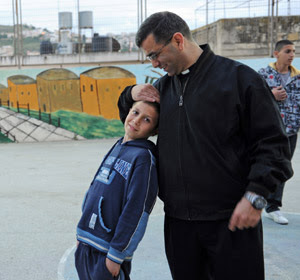 Over the past several years, The Atonement Academy has had a "sister relationship" with St. Joseph School in Jifna.  During the Lenten season, our students raised nearly $9,000 for the school in Jifna, and last January on our pilgrimage to the Holy Land several of us from the parish had the joy of visiting Fr. Firas, who gave us a tour of the church and school.  The following story about St. Joseph's was just published by Catholic News Service:


JIFNA, West Bank (CNS) -- As dusk fell on this sleepy West Bank village, Father Firas Aridah looked down from the balcony of his office onto the church courtyard, where a group of young boys -- and one girl -- were in the midst of a heated soccer match.


Religious songs in Arabic flowed over the church's loudspeakers and mingled with the shouts of the children as they played on the clear Saturday evening. As soon as the church bells began to ring, the boys disappeared while the girl slipped into the church, but the priest was not worried.


He knew that while the pews at St. Joseph Church filled mostly with women and girls, the boys would be back later, when the church youth group began its special activities for the younger children. Most importantly, what he saw was that among those parishioners who came to Mass, there were almost 25 young children -- including four boys -- and teenage girls.


After the first and second Palestinian uprisings, the church lost many of its youth to the political arena, and political rivalries infiltrated the lives of families and the church, Father Aridah said before the Mass. Now he and other priests in the diocese have been focusing on bringing Catholic youth back into the church.


At the conclusion of the Mass, the courtyard filled with young people of all ages. Boys roughhoused and tried to shoot some hoops; young girls gathered in small groups, giggling; young men and women chatted with each other along the wall of the church. Youth leaders tested the microphone and lined up the younger children.


Suddenly the sounds of the "Hokey Pokey" blasted through the speakers and the children were shaking and wiggling, laughing and teasing.


On Saturday evenings Father Aridah normally leads the young adult group in Bible study, reading a selection from the Gospel and discussing its relevance to their lives, but this particular Saturday in May was dedicated to the younger children of the parish.


Fadi Makhlouf, 34, the choir director, organist and youth leader, smiled from the church entrance as the dancing was about to begin. He said parishioners need to "live our Christianity. Father Firas and, in general, other priests are trying to get the youth back to the churches. In some places they are succeeding, in some not."


Father Aridah said he is not trying to remove Christian young people from political activities.


"From the church they can give their testimony of faith and be involved in the society as it should be, as Christians," said Father Aridah. "I have to give them a Christian view how to live in the political parties, how I have to protect my dignity by peace, not just throwing stones."


Young Christians need to learn how to witness their faith on one hand while being an instrument of peace on the other, said the priest. Through their growing connection with the church and study of their religious texts, he hopes he can provide the youth with the necessary tools.


During the intifada, when there were closures and curfews, the church became only a place to pray because residents were afraid to send children alone, recalled Fairuz Shomali, 23, who said she has always been involved with church activities.


Now she is trying to provide for the younger generation what she did not have during those years: a place to socialize and strengthen the sense of community.


"It is important to encourage the youth and to make them aware of their Christian religion, why we pray. We live here as Christians," she said.


William Abdo, 24, drifted away from the church in his late teens when he became involved in political activities. When he was 18 he spent eight months in an Israeli jail for throwing stones at an Israeli jeep.


"It's a complicated issue, coming to church or not. When you get older you begin to see things differently," said Abdo. Now, he said, he sees the church as a way to reach out and help people, not just as a place of prayer or religious beliefs.


Even during the local elections four years ago, politics divided families and parishioners, Abdo said. Now, he added, with an active youth outreach program, young people are beginning to become more mature in their outlook and realize the unique role the small Christian community can play in their lives. As they are given more responsibility and bigger roles to play within the church community, more youth will begin to come, he predicted.


"Christian youth need to be active in both the church and the community," he said.


Part of the reason more young people are returning to the church, said Diana Makhlouf, 22, is that Father Firas, 36, is close to their age and someone to whom they can relate.


Makhlouf said that since she studied for many years outside Jifna, the church youth activities are helping her meet more people within the Christian community in her own village.


"I see that putting my energies into my church is what makes ... us more connected to each other and creates a personal relationship with the church and with others," she said.


In the darkening churchyard, two children pulled large inner tubes over their heads for the next activity, laughing as a quasi-Sumo-wrestling match ensued.


Grinning, Aziz Musleh, 14, stepped away from his friends for a moment.


"I come here to have fun with my friends," he said, and then he added: "I come to the church for prayer. We pray together as friends. We listen to "Abouna" (father). We want our relationship with God to be stronger. This is teaching me for the future."

Please pray for all our brothers and sisters in the Holy Land.  For Christians, life there is not easy.  The temptation is to leave as soon as possible, but with our assistance we can help Christians to remain as a presence in the land where our Lord was conceived, born, ministered, died, rose from the dead, and ascended into heaven.  It would be tragic if there were to be no more Christians in the land made holy by our Lord Jesus Christ.

Grant, O God, that your holy and life-giving Spirit may so move every human heart, and especially the hearts of the people of the Holy Land, that barriers which divide may crumble, suspicions disappear, and hatreds cease; that all divisions being healed, they may live together in justice and peace; through Jesus Christ our Lord. Amen.

Posted by Fr. Christopher George Phillips at 10:53 AM