The Most Sacred Heart of Jesus 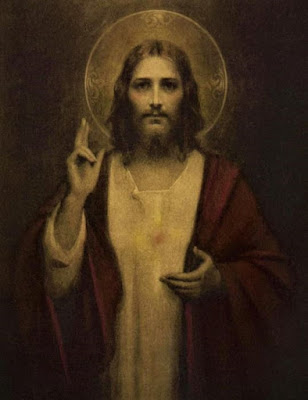 Jesus as the divine Son of God was also human, the son of Mary. He spoke with divine authority but He spoke in human language. He spoke in the simple language of the ordinary people of His day about the things they were most familiar with: the birds of the air, the lilies of the field, the sower and the seed, the vine and the branches. When He wanted to tell His apostles how important they were He said that they were the “light of the world” and the “salt of the earth.” And when He wanted to tell us of God’s love He used the heart, the human symbol of love. He told us that we should learn of Him, that He was meek and humble of heart, and we would find rest for our souls.

The contemporaries of Jesus knew this meek and humble heart of Jesus and they knew that it beat with unconditional love for them. Rough, simple fishermen left their boats and nets to follow him. Learned doctors sat at His feet to hear His wisdom. A tax collector left his money table to become His disciple. Multitudes followed Him for days, and so captivated were they that they forgot to bring food to eat. The sick fought their way through the crowds just to touch the hem of His garment. And they all found peace and rest for their souls.

In a time when man desperately needs God’s love, here he can find it, in the Lord Jesus Christ, whose Sacred Heart is a refuge where God’s love may be found, a fountain from which God’s love is poured out upon us.

O God, who hast suffered the Heart of thy Son to be wounded by our sins, and in that very Heart hast bestowed on us the abundant riches of thy love: grant, we beseech thee; that the devout homage of our hearts which we render unto him, may of thy mercy be deemed a recompense acceptable in thy sight; through the same Jesus Christ thy Son our Lord, who liveth and reigneth with thee, in the unity of the Holy Spirit, ever one God, world without end. Amen.