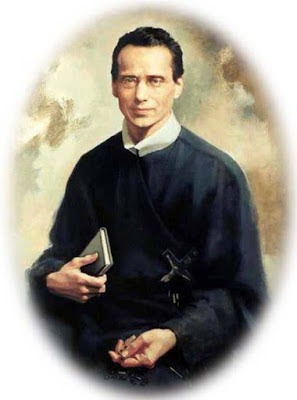 The priestly zeal of Francis Xavier Seelos took him to many places, but always with the same purpose; namely, to help people know the great love and compassion of God. And not only did he preach, but he put his words into practice, even to the point of risking his own life in caring for the sick and the dying.
Francis Xavier Seelos was born in southern Bavaria in the year 1819. He studied philosophy and theology in Munich as part of his preparation for the priesthood, but while still a student he became fascinated with the missionary work of the Redemptorists, which they were carrying out amongst the German-speaking immigrants in the United States. He arrived in America in 1843 and was ordained in the Redemptorist Church of St. James in Baltimore at the end of 1844. He was assigned for six years to the parish of St. Philomena in Pittsburgh, where he served as an assistant to St. John Neumann, who would become one of our great missionary bishops.

During the several years he was engaged in parish ministry throughout the state of Maryland, Fr. Seelos also had the responsibility of training Redemptorist students for the priesthood. In fact, during this time the Civil War broke out, and he went went to Washington, D.C. to appeal to President Lincoln that his students not be drafted for military service, although eventually some were.

For several years Blessed Francis Xavier Seelos preached in English and in German throughout the Midwest and in the Mid-Atlantic states. Eventually he was assigned to St. Mary of the Assumption Church in New Orleans, where he served faithfully as pastor. In 1867 he died of yellow fever, being only forty-eight years old, having contracted the disease while visiting the sick in his parish. He was described as a priest with a constant smile and a generous heart. He was beatified in 2000, and his cause for canonization is moving forward.

O God, who makest us glad with the yearly feast of blessed Francis Xavier Seelos, thy Priest and Confessor: mercifully grant that, as we now observe his heavenly birthday; so we may follow him in all virtuous and godly living; through Jesus Christ thy Son our Lord, who liveth and reigneth with thee, in the unity of the Holy Spirit, ever one God, world without end. Amen.

Posted by Fr. Christopher George Phillips at 10:40 AM