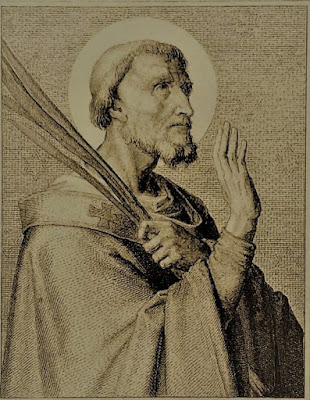 Although little is known of the early life of the seventh century pope and martyr St. Martin I, we do know that he was member of the Roman clergy, and was elected pope in 649. He immediately found himself in the center of a religious and political controversy, which provides us with facts about him during his pontificate.

In the Byzantine (Eastern) Empire there was a heresy, or false teaching, known as Monothelitism, which said that Christ, while on earth, had no human will, but only a divine one. (The Church teaches that Jesus has two wills: a full and perfect divine one, and a full and perfect human one, and these two wills are in perfect accord with each other.) Why is this teaching important? If Christ had no human will, then He wouldn’t be truly human – He would simply be God dressed up in human flesh. We see the two wills of Christ in Scripture when, for example, Jesus was praying in Gethsemane, and He prayed to His father, “Nevertheless, not my will, but thine be done.”

Several of the Eastern emperors had favored the Monothelite teaching, and they were supported by the patriarch of the imperial city of Constantinople.

Pope Martin convened a Council at the Lateran, and the bishops gathered there affirmed the true teaching about the two wills of Christ.

Pope Martin lay on a couch in front of the altar, too sick to fight, when the soldiers burst into the Lateran basilica. He had come to the church when he heard the soldiers had landed. The thought of kidnapping a sick pope from the house of God didn't stop the soldiers from grabbing him and hustling him down to their ship.

When Pope Martin arrived in Constantinople after a long voyage he was immediately put into prison. There he spent three months in a filthy, freezing cell while he suffered from dysentery. He was not allowed to wash, and was given the most disgusting food. After he was condemned for treason without being allowed to speak in his defense he was imprisoned for another three months.

From there he was exiled to the Crimea where he suffered horribly. But hardest to take was the fact that the pope found himself friendless. His letters tell how his own clergy had deserted him and his friends had forgotten him.

He died two years later in exile in the year 656, a martyr who stood up for the right of the Church to establish doctrine even in the face of imperial power. Truth is sometimes “politically incorrect,” but, as St. Martin knew, followers of Christ must defend the Faith nonetheless, even at the risk of controversy, personal suffering, and death.

Everlasting Shepherd, favourably look upon thy flock: and keep it with perpetual protection through the prayers of blessed Martin thy Martyr and Supreme Pontiff, whom thou didst appoint to be shepherd of the whole Church; through Jesus Christ thy Son our Lord, who liveth and reigneth with thee, in the unity of the Holy Spirit, ever one God, world without end. Amen.

Posted by Fr. Christopher George Phillips at 11:20 AM