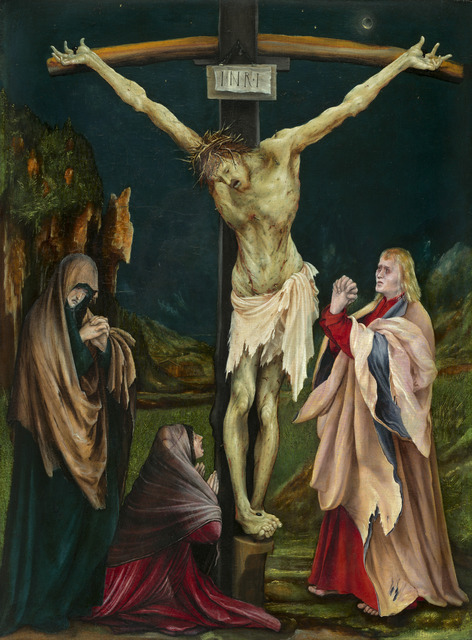 Today Golgotha is sheltered within a magnificent and ancient basilica, but on that Friday called “good” it was a barren hill outside the city walls of Jerusalem. It is a hill soaked with the blood of criminals, executed for crimes both petty and grave, and it is a hill consecrated by the Blood of our Lord, our God-made-Flesh.
He is the innocent Victim, surrounded by a cruel mob. His ears hear the animosity of those who bear hatred in their hearts. The sentence of death by crucifixion had been dragged reluctantly from the lips of the civil authority. And if we could see, we would be appalled by the hideous efficiency of the soldiers as they complete their brutal work of inflicting death.

Also here are the temple priests who will hurry away from the scene even before the Victim takes His final breath. They have a Passover to keep, but it is a Passover now emptied of any real meaning or power because the Passover lambs have been made impotent by the one true Passover Lamb who is shedding the only blood which can fend off the angel of death.

The Lamb of God takes away the sin of the world. His last powerful cry will prove that no man has taken His life from him, but that He has laid it down of His own divine Will. He will bow His head in token of assent to that deed which was not understood by those who did it. It will be finished. The price of sin paid, the kingdom of heaven opened to all believers, the redemption of man accomplished.

The disrespect and the ill-treatment by those who were there will cease. The mockery and the spite and the violence done to the Saviour of the world will give way to the silent anguish of mournful hearts and the tender care of loving hands. The soldiers will have satisfied their discharge of duty. They will gather up their instruments of execution and they will leave. The people who had come to satisfy their morbid curiosity and spiteful feelings will feel cheated that the spectacle was so brief. The disinterested loiterers will disperse. And this hill, this Golgotha which had been the scene of such cruelty will be wrapped in the silence of death, deserted by all except those few faithful souls who keep a watch of love around the Cross, wondering in their aching hearts what they should do.

It is nearly over, and yet it continues. Loving hands yearn to take the Lord down from the Cross, and yet we leave Him hanging there. Our own sin, our own inaction, our own lukewarm love will not let Him come down from the Cross. How often have we “hid our faces from Him,” and have been ashamed to confess Him before the world, and so have left Him hanging there. How often, when the world has denied Him and insulted Him and abused His mercy and blasphemed His Name and ridiculed His Body the Church, we have held our tongues, and so have left Him hanging there.

So we find ourselves on a barren hill outside the walls of the city of Jerusalem, and we remember how often we have ignored the very truth for which Christ died, as we look upon the Cross and see that battered and bruised face, and view that lifeless form, and realize the part that we have taken in that cruel death.

It is almost more than we can bear. It is as though we should go away and hide our faces from Him for very shame and grief – except His love constrains us and asks us to stay. Our hearts cry out in sorrow for what we have done and for what we have failed to do, and we know that we cannot leave Him hanging there any longer. Our Lord Jesus Christ is no dead body left on a cross. No, His is a living and life-giving Body waiting to be taken down even by those who have despised and rejected him. He is the Bread of Life, of Whom whosoever shall eat, will live.

Therefore, let us draw near in faith and wrap our Lord’s Body in that fine linen which is the righteousness that comes from God. Let us place within the folds of that linen the bitter herbs of our penitence and anoint him with the oils and spices of our gratitude and our love. With reverence and with true devotion let us lay that Sacred Body in the sepulcher of our hearts, so that the miracle of Christ’s love will rise up in our lives, just as He rose up from the grave on the third day.

“It is finished,” He declared from the Cross. So let it be finished. Let it be completed. Let it be fulfilled in us, so that with hands and hearts and lives cleansed by His blood and enlivened by His love, we may not leave Him hanging there, but take Him down from the Cross, and let Him live in us.

Almighty God: we beseech thee graciously to behold this thy family, for which our Lord Jesus Christ was contented to be betrayed, and given up into the hands of wicked men, and to suffer death upon the Cross; who now liveth and reigneth with thee, in the unity of the Holy Spirit, ever one God, world without end. Amen.