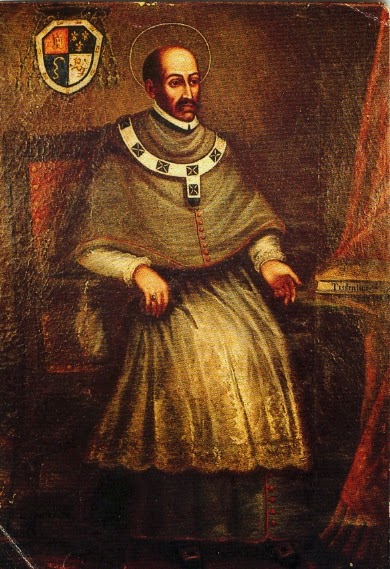 Together with St. Rose of Lima, St. Turibius is among the first of the known saints of the New World, serving the Lord in Peru, South America, for twenty-six years.

Born in Spain and educated for the law, he became so brilliant a scholar that he was made professor of law at the University of Salamanca and eventually became chief judge at Granada. He was a great success, but he was about to enter upon a surprising sequence of events.

When the archbishopric of Lima in Spain's Peruvian colony became vacant, it was decided that Turibius was the man needed to fill the post. It was generally agreed that he was the one person with the strength of character and holiness of spirit to heal the scandals that had infected that area. Turibius cited all the canons that forbade giving laymen ecclesiastical dignities, but he was overruled. He was ordained priest and bishop and sent to Peru, where he found colonialism at its worst. The Spanish conquerors were guilty of every sort of oppression of the native population. Abuses among the clergy were wide-spread, and he devoted his energies (and his suffering) to this area first.

He began the long and arduous visitation of an immense archdiocese, studying the language, staying two or three days in each place, often with no place to sleep, and little or no food. He made his confession every morning to his chaplain, and he would then celebrate Mass with tremendous devotion. Among those to whom he gave the Sacrament of Confirmation was Saint Rose of Lima, and most likely Saint Martin de Porres. After 1590 he had the help of another great missionary, Saint Francis Solanus.

His people, although they were very poor, also had a sense of personal pride, and they were unwilling to accept public charity from others. Turibius solved the problem by helping them himself, anonymously.

When Turibius undertook the reform of the clergy, along with unjust officials, he encountered tremendous opposition. Some tried to "explain" God's law in such a way as to make it appear that God approved of their accustomed way of life. He answered them in the words of Tertullian, "Christ said, 'I am the truth'; he did not say, 'I am the custom."'

O God, who gavest increase to thy Church through the apostolic labours and zeal for truth of the Bishop Saint Turibius: grant that the people consecrated to thee may always receive new growth in faith and holiness; through Jesus Christ thy Son our Lord, who liveth and reigneth with thee, in the unity of the Holy Spirit, ever one God, world without end. Amen.

Posted by Fr. Christopher George Phillips at 10:05 AM