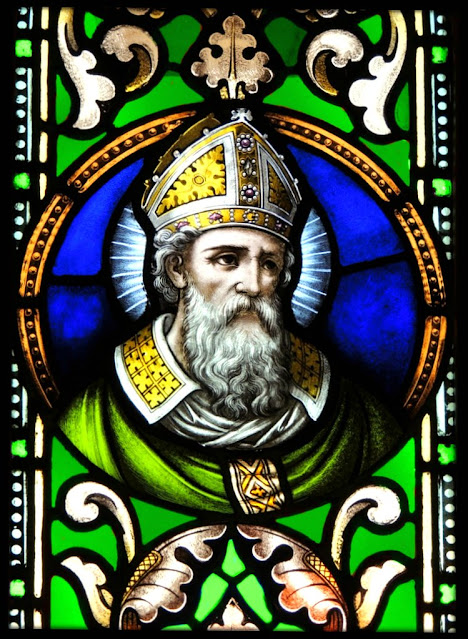 When Patrick was fourteen or so, he was captured during a raid being carried out by Irish invaders, and he was taken to Ireland as a slave to herd and tend sheep. Ireland at this time was a land of Druids and pagans. During his time of captivity, he learned the language and practices of the people who held him, and even though he was among them as a slave, he began to love the Irish people.

Patrick's captivity lasted until he was twenty years old, and he then escaped, after having a dream from God in which he was told to leave Ireland by going to the coast. When he reached the sea, he found some sailors who took him back to Britain, and he was reunited with his family.

The time came when he had another dream in which the people of Ireland were calling out to him, "We beg you, Patrick, to come and walk among us once more."

He began his studies for the priesthood, and he was eventually ordained. Subsequently Patrick was consecrated to the episcopacy, and was sent to take the Gospel to Ireland. He arrived in Ireland on March 25, 433, and he came upon a chieftain of one of the tribes, who tried to kill Patrick. Patrick converted this chieftain, and he then began preaching the Gospel throughout Ireland, converting many. He and his disciples preached and converted thousands and began building churches all over the country. Kings, their families, and entire kingdoms converted to Christianity when hearing Patrick's message.

St. Patrick preached throughout Ireland for 40 years, working many miracles and writing of his love for God in his “Confessions.” After years of living in poverty, traveling and enduring great suffering, he died on March 17, 461.

O Almighty God, who in thy providence didst choose thy servant Patrick to be an apostle to the people of Ireland, to bring those who were wandering in darkness and error to the true light and knowledge of thee: grant us, by his intercession, so to walk in that light; that we may come at last to the light of everlasting life; through Jesus Christ thy Son our Lord, who liveth and reigneth with thee, in the unity of the Holy Spirit, ever one God, world without end. Amen.