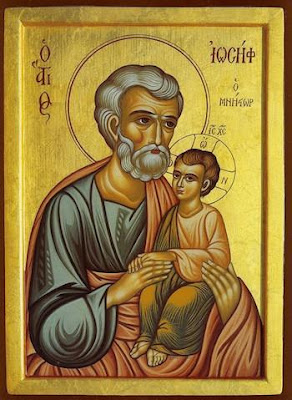 Our knowledge about Joseph is not extensive, and yet enough is known to reveal what his character was. What we know of him, we know from the Gospels, and it is there that we see him to be a man who was determined to do what is right in the sight of God, and to do it in a kindly way. He was betrothed to Mary, and according to Jewish practice, betrothal was as sacred as marriage. Because of that, any infidelity before the actual marriage were treated in the same way as infidelity after marriage: death by stoning was the punishment for such sins. By all human appearance, Joseph's beloved betrothed was in just such circumstances, and he had to act in the way that seemed best. Certainly, he was a just man, but he was a kind man, too, and surely what Mary told him made a great demand on his faith. But that is the point: Joseph was, above all, a man of faith and completely obedient to the divine will of Almighty God. When it was revealed to him that Mary was to bear the Incarnate Son of God he took her to be his wife. There was no hesitation, no consideration of what others might think or how they might judge. It mattered little to him that it was assumed he was the human father of this Child -- not that he would have encouraged others to believe such a thing, for he knew the truth -- but it was better than having people think that Mary had shamefully conceived with someone else, and so Joseph took the responsibility, knowing that one day the truth would be known, and that Truth "would make men free." It is in this very situation, brought about by God Himself, that Saint Joseph's justness and kindness are both revealed.

His justness is shown in that he was a devout servant of God, and he ordered his life according to the standard of that law which had been revealed to the Jewish nation. He sought to please God in all things, even when it meant that he would be misunderstood or even harshly judged by the world. And because justness does not exclude kindness, his response to the revelation that Mary had conceived by the Holy Spirit was one of deep gladness and joy, and so he took his place in God's plan without fear or hesitation. This place was not one of glory; rather, it was one of quiet reserve. Whether on the way to Bethlehem, or in the stable, or at the Child's circumcision on the eighth day, or in the Temple when He was presented, or in everyday life in Nazareth, Joseph simply was there. Loved and respected both by the Incarnate Son of God and by the Mother of God, he was a man of deep piety and gracious character.

Within Saint Paul's Cathedral in London is the tomb of its architect, and on that tomb are the words, "If ye seek his monument, look around you." How much more impressive are those words when they are used of Saint Joseph, Patron of the Universal Church. There could be no greater remembrance of Joseph's holy life, than that glorious Church founded by the Lord Jesus Christ, the foster-son of the quiet, just, kind man of God.

O God, who from the family of thy servant David didst raise up St. Joseph to be the guardian of thine incarnate Son and the spouse of his Virgin Mother: Give us grace to imitate his uprightness of life and his obedience to thy commands; through the same thy Son Jesus Christ our Lord, who liveth and reigneth with thee and the Holy Spirit, one God, for ever and ever. Amen.