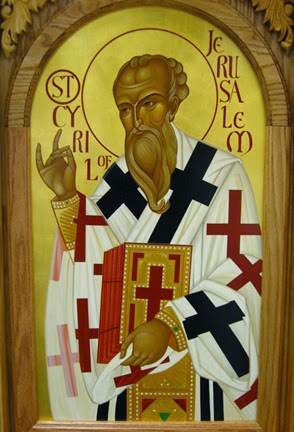 Cyril of Jerusalem loved to study the Holy Scriptures from the time he was a child, and he made such progress that he became known for his deep faith. He was eventually ordained priest by St. Maximus, Patriarch of Jerusalem, and he was given the work of preaching to the faithful and instructing those preparing for baptism. His Catechetical Instructions, which explain clearly and fully all the teaching of the Church, still exist today for us to read. His treatment of these subjects is so distinct and clear that he refuted not only the heresies of his own time, but also, by a kind of foreknowledge, he was able to expose heresies which would develop later. Upon the death of Patriarch St. Maximus, Cyril was chosen to be bishop in his place.

As bishop he endured many injustices and sufferings for the sake of the faith at the hands of the Arians. They could not bear his strenuous opposition to their heresy, and so they told lies about him, and drove him into exile. They were so violent against him that he fled to Tarsus in Cilicia, but eventually, with a new emperor and the death of many of his enemies, Cyril was able to return to Jerusalem, where he taught his people and led them away from false doctrine and from sin. If once wasn’t enough, he was driven into exile a second time under the Emperor Valens, but eventually peace returned to the Church, and the Arians were once again brought under control, so he was able to return again to Jerusalem. The earnestness and holiness with which he fulfilled the duties of being bishop were evident in the strength and holiness of the Church in Jerusalem.

Tradition states that God gave a sign of His divine blessing upon the spiritual leadership of Cyril by granting the apparition of a cross, brighter than the sun, which was seen by pagans and Christians alike. Another marvel happened when the Jews were commanded by the wicked Emperor Julian to restore the Temple which had been destroyed. They no sooner began the work when an earthquake happened and great balls of fire broke out of the earth and consumed the work, so that Julian and the Jews were terrified and gave up their plan. This had been clearly foretold by Cyril. He lived long enough to see the Arian heresy condemned, and he died as a beloved and holy bishop, eventually acknowledged to be a doctor of the Church.

Grant, we beseech thee, Almighty God: that at the intercession of thy blessed Bishop Saint Cyril, we may learn to know thee, the only true God, and Jesus Christ, whom thou hast sent; that we may be found worthy to be numbered for ever among the sheep that hear his voice; through the same Jesus Christ thy Son our Lord, who liveth and reigneth with thee, in the unity of the Holy Spirit, ever one God, world without end. Amen.

Posted by Fr. Christopher George Phillips at 9:50 AM