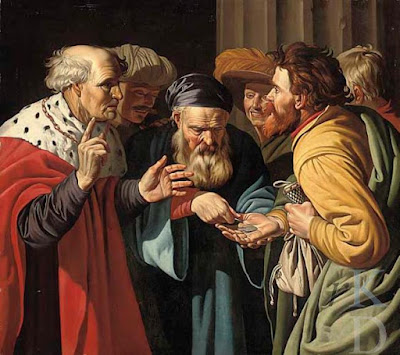 Then one of the twelve, who was called Judas Iscariot, went to the chief priests and said, "What will you give me if I deliver him to you?" And they paid him thirty pieces of silver. And from that moment he sought an opportunity to betray him. Now on the first day of Unleavened Bread the disciples came to Jesus, saying, "Where will you have us prepare for you to eat the Passover?" He said, "Go into the city to a certain one, and say to him, `The Teacher says, My time is at hand; I will keep the Passover at your house with my disciples.'" And the disciples did as Jesus had directed them, and they prepared the Passover. When it was evening, he sat at table with the twelve disciples; and as they were eating, he said, "Truly, I say to you, one of you will betray me." And they were very sorrowful, and began to say to him one after another, "Is it I, Lord?" He answered, "He who has dipped his hand in the dish with me, will betray me. The Son of man goes as it is written of him, but woe to that man by whom the Son of man is betrayed! It would have been better for that man if he had not been born." Judas, who betrayed him, said, "Is it I, Master?" He said to him, "You have said so."

Elsewhere the Gospel tells us that Satan entered into Judas, but even before this, Judas had shown himself to be dishonest and a lover of money. He kept the money box which was used for the needs of Jesus and the disciples, but he was accustomed to taking money out for himself. When the expensive perfume was used to anoint Jesus, he complained that it could have been sold and the money given to the poor – although he was more likely thinking that he could take the money himself. And now, he goes to the chief priests and asks what they would give him if he delivered Jesus to them. The bargain was struck: thirty silver pieces for the Son of God.

Could the betrayal by Judas have been because of something as common and low as his love for money? Certainly, it looks that way. There could have been other reasons – some have said that he was trying to force Christ into revealing himself as the Messiah. Some have said that Judas was jealous of all the other disciples and so wanted to do something to ruin their common life together. But if Judas betrayed Jesus for those reasons, why did he ask for money when he went to the high priests? He could have handed Jesus over to them without asking for money.

No, Judas was a lover of money, a worldly man who was looking for personal gain. As St. Paul wrote to St. Timothy, “The love of money is the root of all evil.” And this, no doubt, was an evil act. When Judas approached Jesus in the garden, our Lord asked him, “Judas would you betray the Son of man with a kiss?” Judas had given his betraying kiss before, when he took money into his filthy hands, caressing it as a lover would his beloved.

We’re horrified by what Judas did. But we need to look at our own lives, too, lest we are betraying Jesus.

O God, who didst will that thy Son should suffer death upon the Cross that thou mightest deliver us from the snares of the enemy: grant that by the merits of his Passion and Death we may know the power of his Resurrection; through the same Jesus Christ thy Son our Lord, who liveth and reigneth with thee, in the unity of the Holy Spirit, ever one God, world without end. Amen.

Posted by Fr. Christopher George Phillips at 10:43 AM