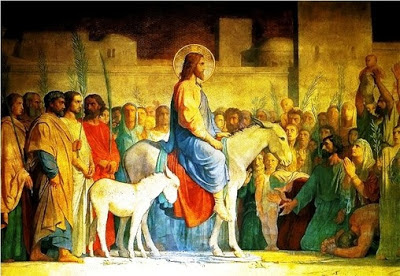 The Divine Will of God unfolds before us as we enter into Holy Week. What took place in the past is made a present reality for us.

Our Lord Jesus enters Jerusalem for the last time, and as He comes, the whole city begins to churn and stir. The simple people come out to meet Him. The thoughtful, puzzled students of Scripture wonder whether this could possibly be “He of whom Moses in the law and the Prophets had written.” They wonder aloud whether this uproar that they were hearing from this crowd streaming down the Mount of Olives and pouring into the city’s eastern gate, might have anything do with the old prophecy about “the Lord coming suddenly to his temple.”

Those whom Jesus had cured of their sickness were blessing Him as they heard Him approaching. Those who had believed in Him felt their faith deepen at the sight of His triumphant entry. And those who had despised Him – well, they still did. And all they could do was sneer at Him and at this crowd of simpletons cheering Him on. As far as they were concerned, He was an unwelcome presence in their holy city – He was intruding on the Passover. In fact, it looked to them like He was trying to bring some new religion to the people – and the proof was this: “Have any of the Pharisees believed in Him?” The answer to that was, “No.” So that settled it. The temple had its traditions, and there was no place for Him there. The Roman occupiers ignored Him, hardly bothering to glance at the pathetic passing procession.

But still, Jesus came. Into Jerusalem He came. For some, He came as an unwelcome intruder; for others, He came as a triumphant king. There were those along the streets who owed to Him the straightness of their limbs and the sight of their eyes and the clear, sane reason of their brains, and they greeted Him with joy. But there were others whom He had disappointed and defeated, who felt that He had trampled on their traditions and contradicted their doctrines and spoiled their trade – and those were the ones who greeted Him with a curse.

What confusion there was in Jerusalem that day! The city was divided against itself. But even with the confusion, Jesus continued on. He claimed the city as His own, which it was. Whether the city welcomed Him or whether it cursed Him, still He went on his way, claiming it all as His own.

And as Jerusalem was, so it is with our own lives, with our own hearts. Each one of us is rather like Jerusalem was that day – we see Him at one and the same time as an unwelcome intruder and as the king whom we love – because there is something in each one of us that is saying to him, “Come in, come into my heart,” and yet at the same time saying, “Go away. I don’t want you to rule over me.

And yet Christ, whether He be king or intruder, whether He be welcomed or rejected, goes on His way, pressing on into each heart’s most secret place, claiming always that He, and He alone, is the heart’s king. This is the claim He makes on us throughout this holiest of all weeks – He is the Man of Sorrows – sorrowful because He is despised and rejected by the world; sorrowful because of our divided hearts. And yet, the struggle in any heart cannot go on forever. Every heart has to decide, just as Jerusalem had to decide. Of course, before the week was over, Jerusalem did decide – tragically so – and Christ was crucified. Hatred triumphed, and Jerusalem crucified its king.

This is what is faced by every heart this week. Just as Jerusalem had to decide, so each one of our hearts has to say finally to Jesus, “Come in” or “Go away.” He won’t go away unless you make Him go; and He won’t come into the inner temple of your heart unless you invite Him to. But our decision has to be made this week – either we walk with Him, or we turn away from Him. Either we love Him, or we ignore Him. He’ll either be the king of your heart, or He’ll be an unwelcome intruder in your life.

But really, to make our decision, all we need to do is lift up our eyes to the Love which was nailed on the cross, and when we see that, how can we choose anything else, other than to walk with Him, and to love Him, and to make Him our King?
Posted by Fr. Christopher George Phillips at 11:40 AM