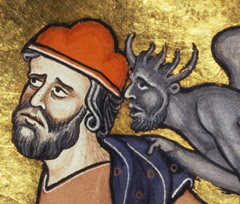 It’s upsetting to most people if they find out that others have been talking about them in a bad or false way. When lies are spread around about us, it’s one of the most difficult and devastating things that can happen. It has been rightly said that “a lie gets halfway around the world before the truth has a chance to get its boots on.”

At Mass on Monday in the fifth week of Lent we hear the story of Susanna, from the Book of Daniel. Susanna was a woman who loved God. She was unjustly accused of adultery by two elder judges who had tried to force themselves on her. Since adultery was a serious offense punishable by stoning to death, the law of Moses required at least two witnesses, rather than one, to convict a person. Susanna knew she had no hope of clearing her good reputation and escaping death unless God Himself intervened. God in His mercy heard the plea of Susanna, and Daniel was the instrument God used, resulting in punishment for the two elders who had given false witness.

When we consider the great damage that can be done, either by telling outright lies, or by spinning things to make someone look bad, it’s apparent just how sinful that kind of behaviour is. When it comes to saying anything about anybody, we need to think very carefully before speaking, and often it’s better not to say anything at all.

St. James in his epistle says that the tongue is only a small part of the body, but then he reminds us that a very small flame can set a whole forest on fire. That’s something for us to consider seriously when it comes to our conversations.

Don’t abuse others with your words. Don’t pass along to others what seem to be juicy tidbits about someone. That little feeling of dark pleasure which so often accompanies your judgement on someone else will return as God’s judgement upon you.
Posted by Fr. Christopher George Phillips at 12:03 PM