The Chair of St. Peter 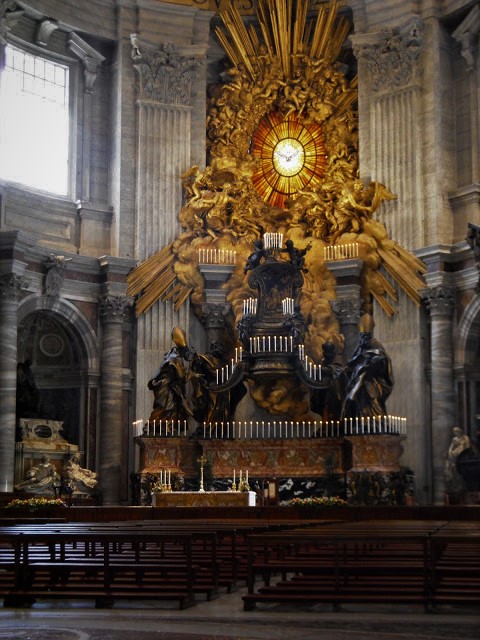 At that time: when Jesus came into the district of Caesarea Philippi, he asked his disciples, "Who do men say that the Son of man is?" And they said, "Some say John the Baptist, others say Elijah, and others Jeremiah or one of the prophets." He said to them, "But who do you say that I am?" Simon Peter replied, "You are the Christ, the Son of the living God." And Jesus answered him, "Blessed are you, Simon Bar-Jona! For flesh and blood has not revealed this to you, but my Father who is in heaven. And I tell you, you are Peter, and on this rock I will build my church, and the powers of death shall not prevail against it. I will give you the keys of the kingdom of heaven, and whatever you bind on earth shall be bound in heaven, and whatever you loose on earth shall be loosed in heaven."


Enshrined in the beautiful Bernini reliquary in St. Peter’s Basilica is a chair which was known in the sixth century, parts of which date to the earliest years of the Christian faith. This is the famous Chair of St. Peter. It’s the reason for the feast we celebrate, and is the dedication of the Ordinariate to which we belong.

Why would the entire Catholic world celebrate a feast in honor of a chair? It’s got to be for more reason than that an apostle sat on it – and indeed the reason goes beyond that alone. This Chair is the concrete symbol to us of the authority and primacy of St. Peter, the Prince of the Apostles, the one to whom our Lord entrusted the keys to the Kingdom of Heaven, and who was called the Rock on which Christ would build His Church.

At the opening of the Gospel appointed for this feast, Jesus has gone with His disciples to the region of Caesarea Philippi, a place with a very long and important history – and a place in which pagan worship had been very strong for centuries. In fact, a very beautiful temple had been built there by Herod the Great in honor of Caesar. Also there were several temples dedicated to the worship of Baal. And not only was there the worship of Baal going on here, but nearby there was a great hill, in which there was a deep cavern, and the legend was that this cavern was the birthplace of the Greek god Pan, the god of nature, so this area was also a center for the worship of various pagan Greek gods.

That sets the scene. Here it was, in this area so firmly dedicated to false worship – a place of demonic sacrifices to pagan gods – it was here that Jesus turned to His disciples and asked, “Who do men say that I am?” As the disciples were thinking about their answers, they would have been looking at the various pagan temples and grottoes surrounding them throughout the area, and so they wanted to answer carefully. There were many reminders around them of how wrong people can be when it comes to religion. So it was almost as though they were testing the waters – “Well, some say that you’re John the Baptist; there are others who say that you’re Elijah; some say that you’re one of the prophets.” But our Lord wants them to get this clear in their minds. He wants this to be their own answer, and so He lets them know that He’s not interested in what others are saying. He asks them for a straight answer: “And you – who do you say that I am?” It’s Peter, the one who would be the Rock, the Prince of the Apostles, Christ’s Vicar on earth – it is he who says, “You are the Christ.”

In fact, this is not unlike the situation in which we find ourselves now, in our own day – surrounded by strange beliefs, many of which are completely at odds with the revealed truth of the Christian faith, and Jesus is asking us: “Who do you say that I am?” What took place in the Gospel was one of those moments that are referred to “hinge moments” in history. Something that had never been said before, was now put into words. “You are the Christ.” In those few words, Peter is proclaiming that Jesus is the one who would bring to Israel the glory which had been promised since the days of Abraham, the day for which all creation was preparing from the very beginning.

And so, because of those words – that great confession made by the apostle designated by Christ as the Rock – the fragments of the Chair of St. Peter are venerated. It’s venerated because it was from that very place that the first Pope, the Vicar of Christ, continued to teach the truth which had been entrusted to him by our Lord Himself. That truth has been passed on in its entirety throughout the centuries, and it will continue until Christ returns in glory.

The Chair of St. Peter is a reminder to us that we are not members of some man-made religion, but that we are part of the one true Church, founded by our Lord Jesus Christ upon the Rock which will endure until the end of time and into eternity itself. No matter how fierce the storm, no matter how vicious the attacks, whether they are from the outside or from within, that Rock remains the one sure foundation upon which we safely stand.