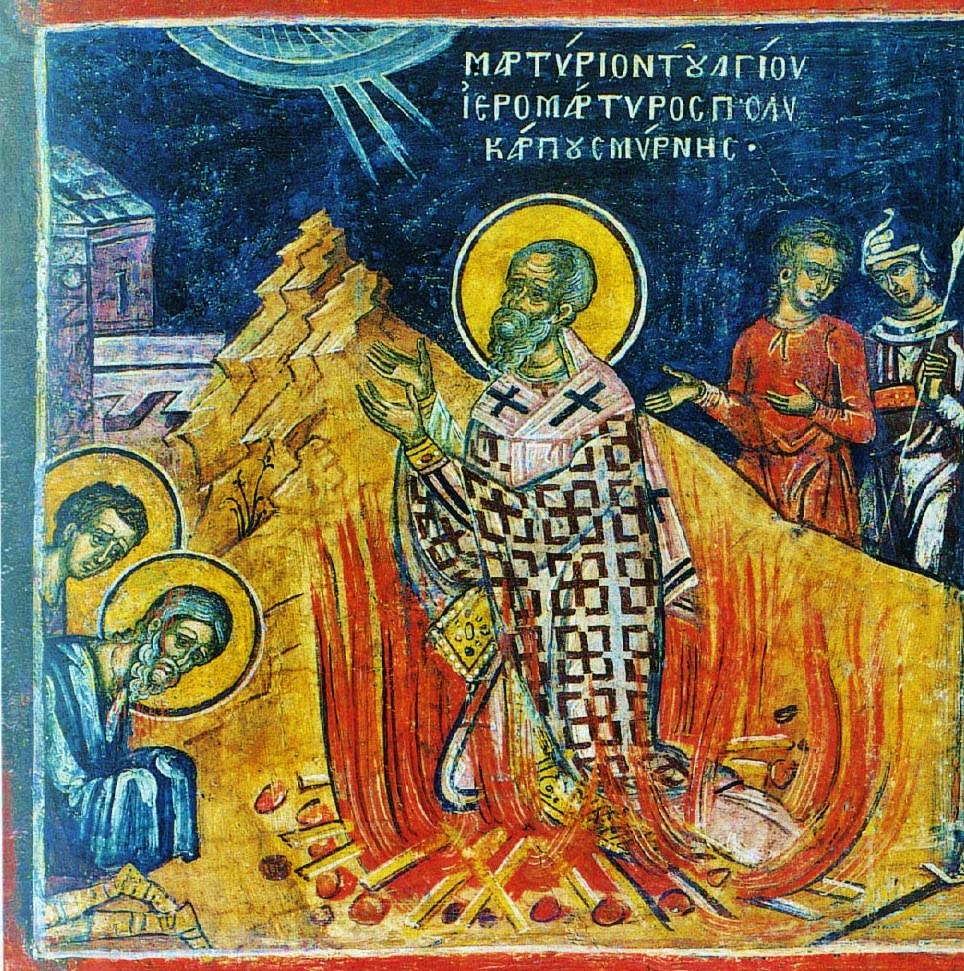 Imagine being able to sit at the feet of the apostles and hear stories of life with Jesus from their own lips. That was what Polycarp was able to do as a disciple of Saint John the Evangelist. But being part of the second generation of Church leaders had challenges that the first generation had not known. With the apostles gone, heresies sprang up pretending to be true teaching, persecution was strong, and controversies arose.

Polycarp, as a holy man and bishop of Smyrna, found there was only one answer -- to be true to the life of Jesus and to imitate that life. As Jesus often responded strongly to the Pharisees, so Polycarp, when confronted by a heretic who demanded respect by saying, "Recognize us, Polycarp," was told by Polycarp, "I recognize you, yes, I recognize the son of Satan."

Polycarp faced persecution the way Christ did. He didn’t seek out martyrdom as some did, but he avoided it until it was God's will. One day, during a bloody martyrdom when Christians were attacked by wild animals in the arena, the crowd became so mad that they demanded more blood by crying, "Down with the atheists; let Polycarp be found." (They considered Christians "atheists" because they didn't believe in their pantheon of gods).

Polycarp was calm but others persuaded him to leave the city and hide at a nearby farm. He spent his time in prayer for people he knew and for the Church. During his prayer he saw a vision of his pillow turned to fire and announced to his friends that the dream meant he would be burned alive.

As the search closed in, he moved to another farm, but he was discovered. He had a little warning since he was upstairs in the house but he decided to stay, saying, "God's will be done."

Then he went downstairs, talked to his captors and fed them a meal. All he asked of them was that they give him an hour to pray. He spent two hours praying for everyone he had every known and for the Church, "remembering all who had at any time come his way -- small folk and great folk, distinguished and undistinguished, and the whole Catholic Church throughout the world." Many of his captors started to wonder why they were arresting this holy, eighty-six-year-old bishop.

But that didn't stop them from taking him into the arena. As he entered the arena, the crowd roared, rather like the animals they cheered. Those around Polycarp heard a voice from heaven above the crowd, "Be brave, Polycarp, and act like a man."

The proconsul begged the old bishop to give in because of his age. "Say 'Away with the atheists'" the proconsul urged. Polycarp calmly turned to face the crowd, looked straight at them, and said, "Away with the atheists." The proconsul continued to plead with him. When he asked Polycarp to swear by Caesar to save himself, Polycarp answered, "If you imagine that I will swear by Caesar, you do not know who I am. Let me tell you plainly, I am a Christian." Finally, when all else failed the proconsul reminded Polycarp that he would be thrown to the wild animals unless he changed his mind. Polycarp answered, "Change of mind from better to worse is not a change allowed to us."

Because of Polycarp's lack of fear, the proconsul told him he would be burned alive, but Polycarp knew that a fire which burned only for an hour was far preferable to the flames of eternal fire.

When he was tied up to be burned, Polycarp prayed. The fire was lit and then the eyewitnesses who reported said they saw a miracle. The fire burst up in an arch around Polycarp, the flames surrounding him like sails, and instead of being burned he seemed to glow like bread baking, or gold being melted in a furnace. When the captors saw he wasn't being burned, they stabbed him. The blood that flowed put the fire out.

The proconsul wouldn't let the Christians have the body because he was afraid they would worship Polycarp. The witnesses reported this with scorn for the lack of understanding of Christian faith: "They did not know that we can never abandon the innocent Christ who suffered on behalf of sinners for the salvation of those in this world." After the body was burned, they took away the bones in order to celebrate the memory of his martyrdom and prepare others for persecution. The date was about February 23, 156.

Fulfil, O Lord, the petitions of thy servants who on this day devoutly reverence the passion of blessed Polycarp thy Martyr and Bishop: and accept us, together with him, as a whole burnt offering dedicated unto thee; through Jesus Christ thy Son our Lord, who liveth and reigneth with thee, in the unity of the Holy Spirit, ever one God, world without end. Amen.

Posted by Fr. Christopher George Phillips at 10:09 AM