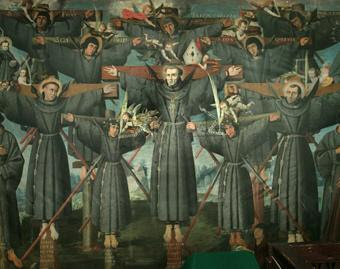 Nagasaki, Japan, is known in history as the city on which the second atomic bomb was dropped in 1945 during the last stages of World War II, killing hundreds of thousands. But some 350 years before that, twenty-six martyrs of Japan were crucified on a hill, now known as the Holy Mountain, overlooking Nagasaki. Among them were priests, brothers and laymen, Franciscans, Jesuits and members of the Secular Franciscan Order; there were catechists, doctors, old men and innocent children—all united in a common faith and love for Jesus and his church.

When Christianity first came to Japan, it was tolerated by the shoguns – the leaders – because they thought it would open up trade with the West. However, they soon decided that the Christian faith wasn’t helpful to them, so they outlawed it, and began the systematic destruction of the faith. The martyrs we celebrate today were rounded up and tortured, trying to get them to deny their faith. Each one of them had an ear cut off, and then they were marched for a thousand miles through the winter months, in the hope that they would denounce the faith, and cause others to do the same. All that accomplished was to make their faith grow stronger. The forced march ended at Nagasaki, where the Christians were then crucified on what came to be known as the Holy Mountain.

St. Paul Miki, a Jesuit and a native of Japan, has become the best known among the martyrs of Japan. While hanging upon a cross Paul Miki preached to the people gathered for the execution. He forgave his persecutors and called people to love God and to obey Him. His final words were, "I ask God to have pity on all, and I hope my blood will fall on my fellow men as a fruitful rain."

When missionaries returned to Japan in the 1860s, at first they found no trace of Christianity. But after establishing themselves they found that thousands of Christians lived around Nagasaki and that even though there were no priests and no sacraments other than baptism, the people had secretly preserved the faith.

Almighty and everlasting God, who didst enkindle the flame of thy love in the hearts of St. Paul Miki and the Martyrs of Japan: Grant to us, thy humble servants, a like faith and power of love, that we who rejoice in their triumph may profit by their example; through Jesus Christ our Lord, who liveth and reigneth with thee and the Holy Spirit, one God, for ever and ever. Amen.